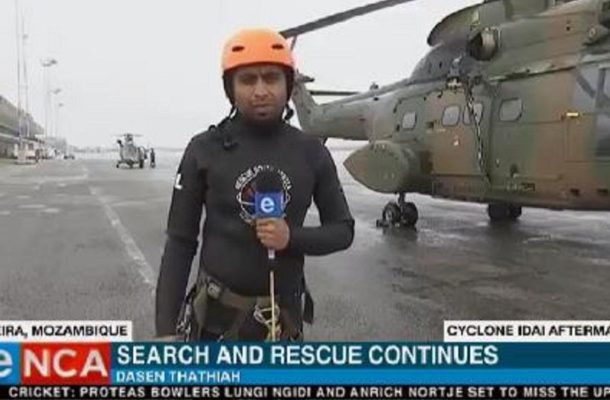 When disasters strike, more often than not the first responders that are spoken about are the medical and relief agencies. Those that relay the work of these responders are usually forgotten, or is it that they forget themselves?

Either way, the media is a crucial player in covering events the world over much so a natural disaster of the proportions that hit southern Africa in middle of March 2019.

Cyclone Idai made a landfall on the Mozambican city of Beira and in a swoop cut the city off from the world – by way of its ravaged roads and even in terms of communication. Masts had been uprooted in the face of the winds and storm. Beira was in the dark.

But it was at the same time that a rescue team from South Africa’s emergency service was heading to Beira and embedded in that team was a journalist from the eNCA news channel, Dasen Thathiah.

At a point, the Red Cross reported that 90% of the city had been damaged. Over a week after the cyclone hit, flood waters are yet to fully recede. In the first part of the interview we focus on the city of Beira, the most impacted by the cyclone.

Dasen is currently back home in South Africa after covering the most delicate parts of the relief and rescue operation in Mozambique. He granted Africanews an exclusive interview on his work over the period.

SALUTE to the SANDF for their work in Mozambique and thank you eNCA for taking the nation there. pic.twitter.com/axw3nSnLqH— Mr Fearfokkol | Forever Young (MbalulaFikile) March 22, 2019

2 – How busy is the Beira airport?

It is extremely busy. The world’s media, Non-Governmental Organizations (NGOs,) Mozambican authorities, South Africa Air Force, interested parties and more have descended there. An operations centre is running; with the airport as a base.

3 – How tough was the journey to Beira?

Extremely tough. Getting there by road from Maputo took two days. The road into Beira was littered with trees, debris and fallen electricity poles, making the journey in quite tough.

The morning after we’d arrived, we drove out searching for signal to submit a news story. We discovered the same – and only – road into Beira was completely washed away.

4 – On average, how many people are rescued daily?

5 – Is air transport the only means being used for rescue so far?

Initially, boats were used but aerial rescues quickly became a more viable solution. At the same time, bigger vessels were brought in to continue water rescues. On one of the days, with the assistance of the Indian Navy, 700 people were brought in.

The first team of South Africans to respond to #CycloneIdai are back in the country. They operated in Mozambique and Zimbabwe under the banner of Rescue SA. malungelob #NewsHour Courtesy #DStv403 pic.twitter.com/VwrMv3V4hn— eNCA (eNCA) March 22, 2019

In the final part of this interview, we look at the overall impact of the cyclone on a journalists work, the different first responders who were on ground in the early days and the shock story of a young girl who lost her entire family.