Five months to the World Cup finals – What is the situation of the Group H opponents? 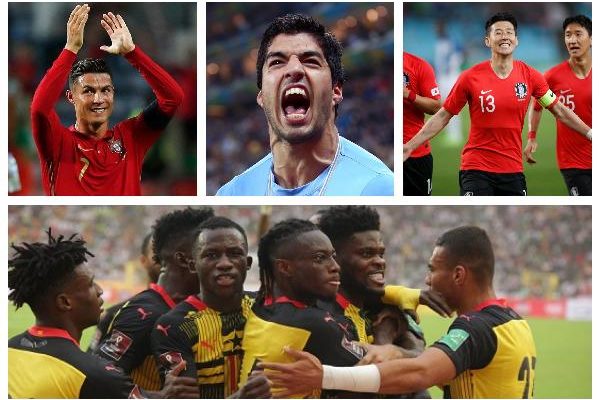 With barely five months to the mundial in Qatar, the Black Stars have shown us the good the bad and ugly all in some four matches they played in the month of June.

Head coach Otto Addo's honeymoon ended after qualifying Ghana to the World Cup in Qatar after defeating fierce rivals Nigeria on the away goal rule.

After taking over the hot seat, the pressure started after naming a virtually club less Wakaso Mubarak who last played active football in November 2021 in his 33 man squad list.

Ghana got their first win under Otto Addo after beating minnows Madagascar 3-0 at the Cape Coast Stadium which saw rookie Felix Afena-Gyan get his first Ghana goal, Osman Bukari also was on the score sheet and debuts for the likes of Antoine Semenyo.

The Black Stars failed to overcome another minnow Central African Republic away from home as they were held 1- 1 with glaring defensive frailties showing especially for CAR's goal.

Otto Addo's side traveled to Japan to play in the Kirin Soccer Tournament where they were humiliated by host nation Japan 4-1.

Ghana's defence was put to a stern test as Kubo and his cohorts run them ragged as the hapless Ati Zigi shipped in goals.

There was comfort and a soothing reminder that all is not lost as a nine man Ghana team beat Chile on penalties as they were a tad unlucky not to have won the game in 90 minutes with Benjamin Tetteh hitting the post twice as Chile goalie Perez pulled off saves from Kudus Mohammed and Andre Ayew.

But the shinning light for that performance was goalkeeper Manaf Nurudeen who saved two spot kicks as Ghana for the first time in a long while beat another nation in penalty kicks.

We take a closer look at group H opponents Portugal, Korea and Uruguay.

Portugal , has been tipped by many pundits as the winner of  World Cup Group H, played 4 matches of the 2022-2023 UEFA Nations League during June.

In their last match against Switzerland, they lost 0-1  but considering Cristiano Ronaldo's absence and the overwhelming advantage of shooting 20-5, this is not a bad record.

Until last year, Portugal was criticized for its lack of substance compared to its splendid squad.

Portugal, which played two matches (Turkey and North Macedonia) in the World Cup European qualifier play-offs in March after being defeated by Serbia, has been drawing an upward curve little by little since then.

The intense pressure from the front and the rapid increase in the speed of the transition from defense to attack are quite different from the Portugal we know.

Above all, coach Santos performed various combinations and experiments based on a thick squad in the 4th consecutive matches in the Nations League, leaving many meaningful achievements.

Among them, wing forward Otavio and defensive midfielder Ruben Neves are noteworthy.

Otavio, who started two games in a row in the European qualifier playoffs in March, started three times in the Nations League this June, gaining the trust of coach Santos.

In the inverted triangle midfield, placing Neves below the vertex and William Carvalho on the left Mezzala, reducing the load on Bruno Fernandes or Bernardo Silva is also a big boost.

Not only that, but Danilo Ferreira effectively covered the injury vacancy of starting centre-back Ruben Dias.

Uruguay's upward trajectory is clear under new gaffer Diego Alonso since taking over from the veteran Oscar Tabares.

He gone undefeated for seven consecutive games since taking over the ailing job from Tabares with a team that was ageing and on its knees.

They nearly missed out on qualification for the World Cup after a disastrous spell under Oscar Tabares.

Diego Alonso literally handed Uruguay a World Cup ticket as they were in real danger of missing out as he won all four games of the World Cup South American qualifiers to book their qualification.

Driven by this momentum, it led to the best result of being scoreless and undefeated in three consecutive matches against North and Central American teams in June.

After beating Mexico 3-0, Panama showed off their firepower and pummeled them by 5 goals.

In the U.S. match, it was a 0-0 draw, but it had a strong personality of experimenting with Plan B, focusing on the appearances of the second team and three-backs.

Manager Alonso has maintained the practical and passive tactics pursued by the previous coach Tabares in the four South American qualifiers. However, in this June friendly matches , he altered his philosophy little by little.

First, the formation was changed to 4-3-3. He drew attention by showing off a quick shift away from the extreme two-line defense of the 4-4-2 formation established by former coach Tabares. While holding the ball for a long time and avoiding widening the ground as much as possible, he operated a build-up that advances quickly with one-touch or two-touch.

Uruguay was not shaken even though two key players, Luis Suarez and Rodrigo Bentancur, were excluded due to injuries.

Up front, Edinson Cavani showed great goal-scoring instincts, and Pelistri broke the opponent's defense with a straight breakthrough from the right. Torreira took the center right above the fabric, and Vecino-Bentancur, who was positioned one square above, dominated the midfield with vigorous activity.

Overall, the advantage of Uruguay is that there is little difference in skill between the main and non-starters.

In the match against Panama, Ronald Araujo moved to the center in the absence of starting centre-backs Diego Godin and Jose Jimenez, and worked with Sebastian Coates and Martin Caceres alternately. Even if Araujo, who is defensively inclined, plays the center instead of the right, Damian Suarez, who is good at attacking, can replace him. On the left, Olivera is a solid starter, but the backup Vina is also very good.

The Koreans played four friendly matches in the month of June as they gear up for the 2022 FIFA World Cup in Qatar.

Paulo Bento's side lost one of the four games played and that was no surprise as it was almighty Brazil who handed them a 5-1 reality check as their brazen gung ho attacking displays was punished.

The loss to Brazil triggered jitters in South Korea over Bento's adventurous style with some critics calling for a return to the days when the national team adopted a safety first approach.

They defeated Chile 2-0 before drawing 2-2 with Paraguay and defeated a Salah-less Egypt by 4-1 in their last game.

Effectively, the Asian side played opponents from South America and Africa with the only missing piece being an European opposition as they had a taste of how group opponents from these continents play although Egypt's style is vastly different from Ghana.

The defensive frailties of the South Koreans was glaring in the four matches they played as they always conceded first in three of the four matches, and shipped eight goals in total although they scored in all of them including the heavy defeat to Brazil.

Paulo Bento is known for his high pressing and counter pressing game which makes use of the full backs a lot, in as much as it gives Korea a lot of attacking threat, it also leaves gaping holes at the back which can be exploited with pacy attackers.

While Bento's  main playing system in almost all of his teams was the 4-2-3-1, after taking charge of Korea and playing with that system in many friendly matches and also the 2019 AFC Asian Cup, he decided to try out other formations and since then we have seen them play with 3-5-2, 4-3-3, 4-4-2 among others.