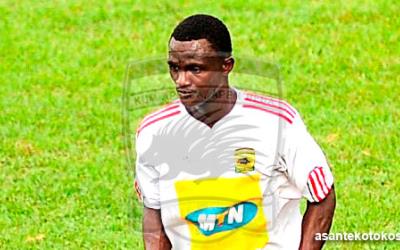 Former Asante Kotoko defender John Kuffour has fallen foul of the law after biting off the nipple of his girlfriend.

The former player who was arraigned before the Ejisu District Court has been granted bail in the sum of GHC50,000

According to the prosecutor, Chief Inspector Emmanuel Appiah Kubi the accused and the complainant Dennisa Hagan, 36, who is a hairdresser have been in an amorous relationship for the past six years

There was a misunderstanding between the two love birds and on the 1st January 2017 the accused John Kuffour paid a visit to Dennisa in her house to enquire If she was still interested in the relationship.

The complainant failed to give an answer and left the kitchen only for the accused to follow her to demand an answer.

Dennisa is reported to have accidentally pushed the accused who was on his knees begging profusely.

The former defender held her dress as she attempted to leave the kitchen and accidentally bit her left nipple.

According to the Prosecutor, a report was made to the Ejisu DOVVSU where the victim was issued with a medical form for treatment at the Hospital.

After a thorough examination by medical officers at the Suntreso Government Hospital, it came out that there is an ulceration of the left breast which needed immediate medical care.

The prosecutor told the court that the wounds from the injury suffered on the left nipple has still not healed.

The suspect was later apprehended and cautioned after admitting to the crime but insist that it was purely accidental without any malice.

The Court presided over by His Worship Mr. Kwaku Baah Frempong, has also ordered the families of the accused  and the victim to jointly help her undergo an urgent surgery and for the accused to report to the court in seven days.