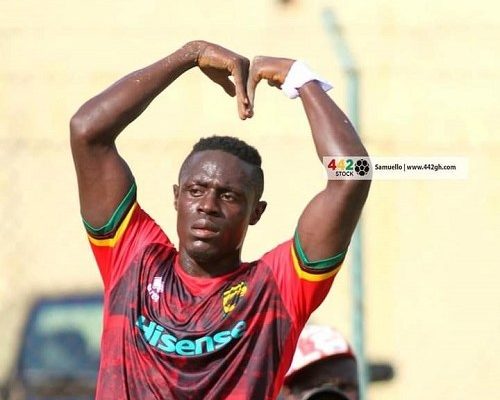 Former Asante Kotoko striker Kwame Opoku has revealed why he always celebrate goals the way he does.

The Kotoko striker has a special way of celebrating his goals by forming the love sign with both hands above his head.

His celebration has raised a lot of suspicion as to why he chooses to celebrate goals the way he does but the striker has opened up in an interview on Ashh Fm.

According to the striker his goal celebration is his way of paying tribute to his mentor who inspired him to play football Bright Lukeman formerly of Hearts of Oak and Ebusua Dwarfs.

"That celebration is to show appreciation to Bright Lukeman formerly of Ebusua Dwarfs, Liberty and Hearts Of Oak. I wasn't interested in football but when Bright saw me play in a Sunday special match, Bright and other guys told me I can play very well with my speed so I should carry on. Two years later, I met him when I was playing for a division 2 side. At that time Bright was with Dwarfs. He catered for me, I even stayed with him when I was playing for a division 2 side. Whenever Bright scores, he used to do that celebration and so I adopted it to show my appreciation for what he did for me some time ago" he concluded.