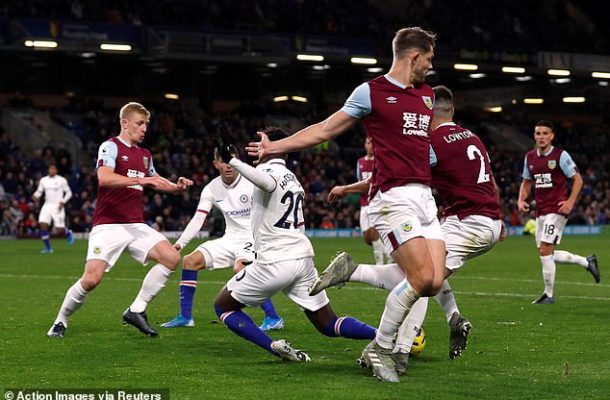 Chelsea boss Frank Lampard has leapt to the defence of Callum Hudson-Odoi after the midfielder was booked for diving against Burnley, saying the incident was 'not clean cut'.

The Blues raced into a 4-0 lead against Burnley at Turf Moor before the home side scored two late goals as the game finished 4-2.

But Chelsea nearly went five up after youngster Hudson-Odoi went down in the area with 15 minutes remaining under a challenge from James Tarkowski and James Lowton - with referee Michael Oliver pointing to the spot. 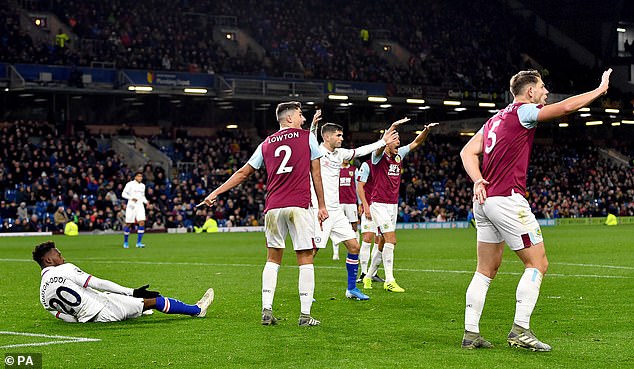 But following a VAR review, Oliver's decision was reversed and the winger was shown a yellow card - with Burnley manager Sean Dyche scathing after the game and saying that players must 'respect the game'.

However, Lampard questioned how clear a dive it was and called for calm over the incident, adding that he would have had a conversation with the 18-year-old if he genuinely felt he tried to deceive the ref.

'If I felt like it was a dive, I'd speak to Callum and say that's not what we're about,' he said. 'But when you're moving into the box at pace and cutting across defenders, whether the VAR decides it is a penalty or not is one thing.

'I thought there were a lot of things going on in the game, of people going down. Their bench wanted everything that was happening, every time Ashley Barnes has a contest in the air, he falls to the ground, they want a free-kick.

'If it was a dive I'd address it for sure. I need to look back at it but I actually don't think it's as clean cut an argument as that.'

His opposite number Sean Dyche has been a huge critic of simulation in the past and has called for tougher action from the Premier League, and he admitted diving still baffles him.

'I can't abide it,' he said. 'I don't know why it's in the game. We were told by the Premier League the worst you can get is a yellow card, so everyone has a chance to cheat once a game knowing they are not going to get sent off. 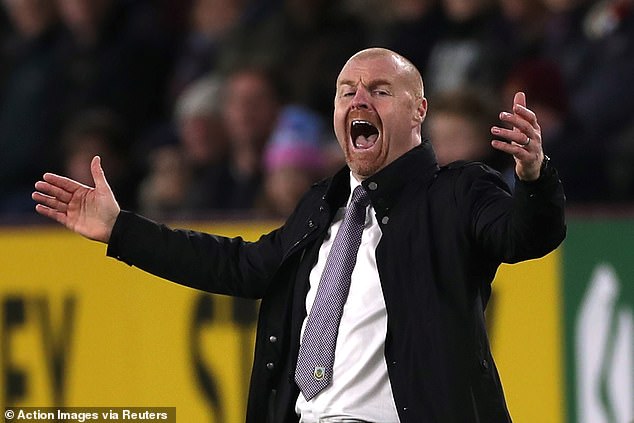 'It's not about the player tonight - the greater good of the game. Because it's shambolic how people just dive all over the place. I keep hearing this word respect. Respect the game. That is what people should be doing.'

Chelsea continued their good recent form with a confident win at Burnley, with Christian Pulisic grabbing the headlines with his first professional hat-trick.

The US star was nicknamed 'Captain America' by team-mate Fikayo Tomori after his heroics, which came after the midfielder had been struggling for game time under his manager.

Willian scored Chelsea's fourth goal of the night as the Blues put the game to bed with half an hour remaining before Burnley's two consolations strikes from Dwight McNeil and Jay Rodriguez.

The Stamford Bridge side stay fourth in the table, five points off leaders Liverpool, who have a game in hand.
Source:dailymail.co.uk