Fraudsters arrested for sowing seed in church with crime money 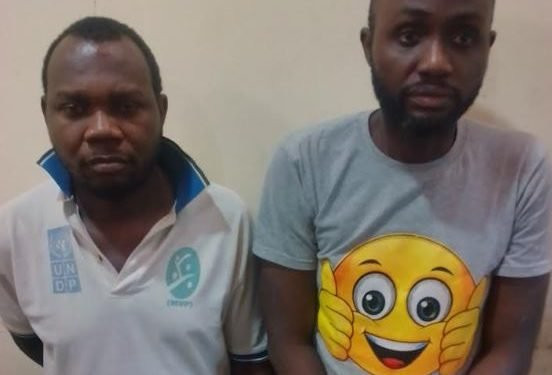 Operatives of the inspector general of police intelligence response team (IRT) have arrested two members of a three-man fraud syndicate who specialize in forging Local Purchase Order (LPO)  to fraudulently collect goods from companies and individuals.

The arrested suspects identified as 52-year-old Oluwatoyin Shyombo and 43-year-old Adeyemo Taiwo, reportedly use some of the goods or one percent of the proceeds to sow seeds in some churches in Nigeria after every successful operation.

Speaking to newsmen, Oluwatoyin said ” We first sent Taiwo to the Apostolic church to tell the pastor in charge that Joseph George wanted to sow seeds. We later went to rice company in Benue and submitted the LPO for 200 bags of rice at #13,500 per bag .

"We also called the Flier Thermacool company in Ilupeju to come to Deeper life church to collect the LPO pretending that we were representing the church whereas the church was not aware of the deal.

"We gave seven standing generators to Amaechi, the standby buyer and he gave us #600,000 for transport, 13 split AC but he did not give us a dime. Police recovered some of the goods."

Also confessing to the crime, Taiwo said “I am married with four children. I work in Oil and gas company. I am from Ile Ife, Osun state. I was formerly working in Bako Superstar company that produces sack at #14,000 salary at Oregun Orile in 1998 but I had problem and was fired.

I started hustling in Apapa. When I carry oil, 50, 000 litres or 33,000 litres I get #1 or #50 per litre. The job is quite challenging and frustrating sometimes. My role was to go to Christ Apostolic in Abuja and tell the pastor in charge that I want to sow seed. It was George that printed the LPO but the moment we were done with the transaction he traveled to South Africa. I collected only #250,000. I went to Deeper life church at Ireakari Isolo and told them we wanted to give them AC and we called the Thermacool company. The arrest of Amaechi led to our arrest. We gave church one standing AC.

"When the company did not see any money they called the complainant who collected the rice and supplied to the fraudsters"
It was further learnt that the churches are usually not aware of their criminal activities.

The Lagos State police spokesperson, Bala Elkana said the suspects will be charged to court after investigation has been concluded.