French Prime Minister, Manuel Valls has endorsed the Mahama led administration for creating an enabling economy for French investments. Valls believes the current state of the Ghanaian economy is lush for the French businesses to invest confidently.

The President, John Dramani Mahama's four years in office has seen the country with infrastructural developments in education, health, roads and other social amenities and these have attracted France to endorse the NDC government for business investments. 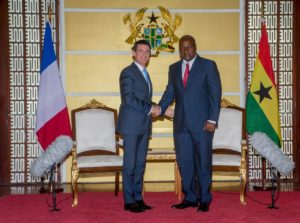 The French man had already visited neighboring country Togo on the first day of his tour in Africa with the aim of strengthening trade bonds in West Africa; Ghana, Togo and Cote d'Ivoire to be specific.

Another reason for the visit was to show his support for democratic change in Ghana. "I am moved by a conviction that is growing ... Africa is for us the continent of the future," the French prime minister said.