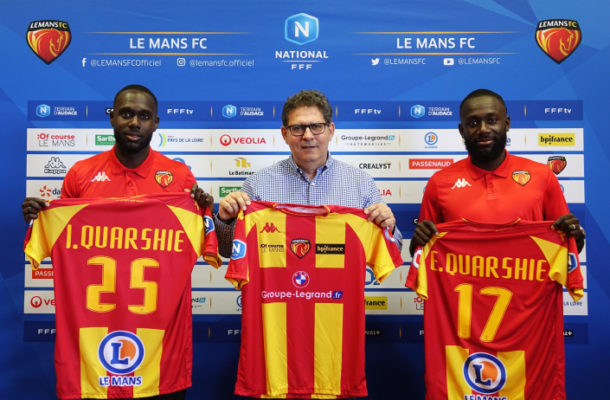 Lower tier French side Le Mans have announced the signing of two French born Ghanaian players who are brothers.

The two players who were born in France to Ghanaian parents are Edwin and Jeffrey Quarshie.

Jeffery, 30, joins the Le Mans based club on a free transfer after exhausting his deal with fellow lower division side Bourg en-Bresse at the end of this year's campaign whiles Edwin, 26, joins from fourth tier side GOAL FC.

An official statement from Le Mans FC confirming the capturing of the duo via their club's official website reads:

"LE MANS FC is pleased to announce the arrivals, this Wednesday, of Jeffrey and Edwin Quarshie,"

"Jeffrey is a 30 year old striker. At FOOTBALL BOURG-EN-BRESSE PÉRONNAS 01 (since 2020), he scored 10 goals in 18 starts during the past National season. He helped FBBP to finish 6th in the standings,"

"Edwin, 26, plays in the middle but also knows how to score. He has just totaled 8 achievements with GOAL FC, 3rd in N2. Before that he had contributed to the rise in National of FC VILLEFRANCHE BEAUJOLAIS then to that of CS SEDAN ARDENNES,"

"The two brothers, who both went through SABLE FC but at different times, are reunited for the first time in their respective careers. They are the 2nd and 3rd reinforcements of the Le Mans transfer window Tristan Boubaya ,"

"President Thierry Gomez as well as the entire Club welcome them and wish them the best under the “blood and gold” colours! Jeffrey will wear number 25, Edwin number 17."

The  two players are yet to be capped by France at any level and are eligible to play for Ghana.