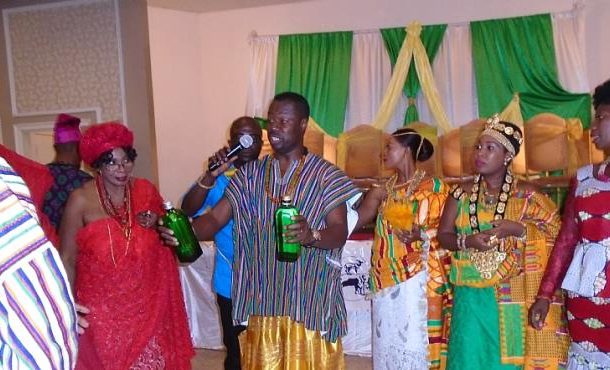 It was Ghanaian tradition and culture at its best when the Ga-Adangbe Association of Toronto held its annual Homowo festival on August 20, 2016.

Ga-Adangbe chiefs and queen mothers elegantly dressed in their traditional clothe and native sandals displayed their ancestral heritage bequeathed to them of which they are holding fast on to as true tradition and culture elsewhere from home.

To the delightful watch of all who gathered at Luna Ball Room for the event, smart cultural troop took to the floor to display their skills in dancing kpalogo which is a traditional dance which received a rapturous applause from the gathering.

Guests who attended the event were served with sumptuous Ghanaian dishes like Kenkey and fried fish, Awakye or RICE AND BEANS, KPOKPOI-traditional food, Banku and soup and many more to their satisfaction.

Nice and moving traditional songs that gave accurate rhythmic movement for the soul and body when played at the background saw many of the gathered moving their feet or tapping it under their tables to give indication that they were enjoying them.

The calculated steps by the elegantly dressed chiefs and queen mothers to the unity song “WOGBE DZEKE” "the great journey"song as composed by Ghanaian musician Mr. Nat Brew, as they proceeded to take their seats added more colour to the event.

Then came in the pouring of libation by the chief priest of Ga-Adangbe Association of Toronto GDAT, Wulomo Nunmo Nii Akrong [Dr], who prayed asking for peace for the resident country Canada and that of Ghana.

According to Wulomo Nunmo Akrong, when peace prevails on the land both citizens and residents will live happily among themselves therefore wisdom demands that wherever one finds himself has to pray for peace for the land.

The atmosphere got charged when Wulomo Nunmo Akrong, after pouring the libation officiated the sprinkling of the traditional food KPOKPOI by the Ga chief Nii Kwei Arku V which signified hooting at hunger by providing abundance of food.

The traditional and customary activity was crowned by dancing the Great Journey dance to the tune of the WOGBE DZEKE song which saw every one gathered taking to the floor and formed a moving circle as they took their steps two to the left and two to the right.

In pursuit of love care and protection for one another, Ghanaians living in foreign destinations have formed traditional and resident associations and Ga-Adangbe Association of Toronto is one of them.

What is interesting about these associations is that they are holding fast unto Ghanaian culture and tradition in foreign destinations to showcase what Ghanaian heritage.

A typical example is when the Ga-Adangbe Association of Toronto in Canada held their annual Homowo festival on August 20, 2016.