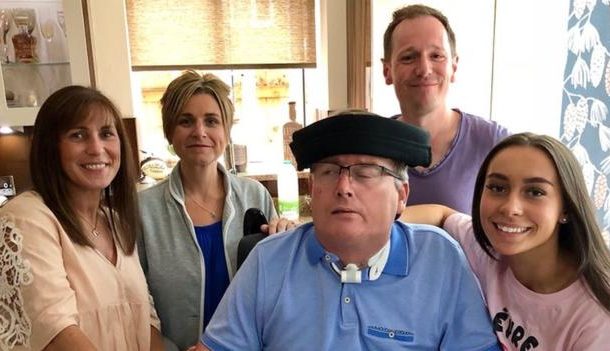 Imagine being unable to move and unable to talk, yet completely aware of what is going on around you.
That is what life is like for former Middlesbrough and Burnley defender Gary Parkinson.
A right-back with a keen eye for goal, Parkinson's life changed forever in September 2010 as a stroke left him in a critical condition.

Then just 42, he was diagnosed with locked-in syndrome, a disorder that leaves you cognitively sound but without the ability to move any part of your body.
His only way of communicating is by blinking.
"Locked-in syndrome is absolutely the most devastating of the strokes you can have," said Mark O'Donnell, medical director at Blackpool Victoria Teaching Hospital.
"If you think of the brain as a cauliflower with a stem, there's a part of the brain called the brain stem. In people with locked-in syndrome, it is the brain stem that becomes affected."
With no known cure, such a devastating condition means Parkinson needs 24-hour care.
Here, his family, friends, and former players and colleagues talk to BBC Radio Lancashire's Andy Bayes about communication, isolation and looking forward, not back.

How I found the key to unpick locked-in syndrome

The call, the shock & the last rites
Parkinson's son Luke, who was 17 at the time, remembers the moment "mum called us into the lounge" to tell him and siblings Chloe and Sophie their dad had suffered a stroke.
"At the time I didn't really know what a stroke was," said Luke. "Obviously you're aware of what cancer or a heart attack is. I knew a stroke was serious but I wasn't even aware it was to do with your brain.
"I remember crying in my bedroom thinking: 'How can my dad go from being such a strong person to something like this happening?'
"To be told your dad might not pull through is terrible - he was read his last rites twice. I remember my dad's early days in Salford Royal Hospital, where he was wired up to everything going and I thought that might be the last thing I see of him.
"Thankfully we've moved on and things are a little better than they were then."
A 'very dour' first six months
Parkinson spent two years in hospital following his stroke and subsequent diagnosis, with wife Deborah having to adapt and modify their house to allow for his eventual return home.
"It was very dour in the first six months and when I realised there was a possibility to bring him home to carry on his care then that's what we wanted to do," she said.
"All my energy went into the house being redeveloped. There was always that chance.
"The life expectancy of someone with locked-in syndrome isn't very good.
"I only think because of our positivity, the team we had around us and strength that he's always had - that's why we say now in his 50th year that we're so grateful."


Gary Parkinson's house has been adapted by his family to suit his needsVisits from Moyes and Mowbray
During his time in hospital, Blackpool youth coach Parkinson received regular visits from many of his friends within the world of football - including former Manchester United and Everton boss David Moyes.
"I left the hospital many times thinking how lucky and fortunate I was," said Moyes, who was Preston North End manager during Parkinson's spell as a player at Deepdale.
"It was a really strange thing because Parky was a young man and he was still out training with the players and exercising.
"It's normally something you'd expect in someone a bit older. It was a really big shock and it became an even bigger shock when we heard it was locked-in syndrome.
"I spent a lot of time going to see him in the hospital and it was a difficult situation because we were both emotional."
Blackburn Rovers boss Tony Mowbray, who played alongside Parkinson at Middlesbrough, admits to finding it "difficult" when he recalls his experiences of visiting his friend in hospital.
"I'm an emotional, passionate person and I find it really hard to see this lad who I spent five or six of the best years of my life playing football with," said Mowbray.
"I'd sit next to him, travelling away on coaches, spending five or six hours from Teesside, playing alongside him, going through the good and bad times, going on pre-season trips - you get to know each other inside out.
"I find it difficult to think of going to visit him and trying to get reactions from him. When I have been in his company I just try to make him laugh."


Charlie Adam (right) holds a shirt in dedication to Gary Parkinson after scoring in Blackpool's 2-0 win against Newcastle in September 2010Returning home & blinking the alphabet
In 2012, Parkinson was able to return home.
Although the family have received support from the Professional Footballers' Association, Deborah juggles a part-time job with her husband's overnight care - a time she says "we don't want so many people around us".
"The bulk of the care is people we've employed," she said. "We call them 'Gary's personal assistants'. We've also taken on a nurse Gary had in the early days and she's taking on the medical side of his care.
"We've got a physio and a speech therapist. It's a big team who play a part to make Gary's life run a bit smoother."
Learning to communicate without being able to talk has been one of the many challenges - although Parkinson "can certainly get his point across when he wants to".
"I've got to go through the alphabet. We all do," said Deborah. "That's how we've found the best way.
"Gary uses his eyes a lot and he can spell out a letter, and then build it into words and sentences.
"He can make noises which he will do if we're not paying him full attention. Like any family we try to have conversations about anything and everything."
'He mentions the word isolation - I hate that'
Despite those conversations, Deborah is also very aware of ensuring her husband does not become lonely.
"Gary often mentions the word isolation and I hate to hear that," she said. "He's got loved ones around him daily and for him to feel like that makes me sad.
"I don't just leave him sitting there in silence. Five minutes will feel like a lifetime to him.
"I encourage him to go out and sometimes he doesn't want to but once he's there he's loving it.
"He was always that kind of person. He wasn't a loner so we want to keep it that way."


Parkinson celebrates scoring for Burnley at Wembley as the Clarets beat Stockport in the 1994-95 Division Two play-off finalStepping into dad's shoes
As well as the impact it has had on Deborah, Gary's three children have also dealt with growing up with their dad needing care.
"Straight away I felt like I've got to step into my dad's shoes around the house and I still kind of feel like that today," said Luke.
"You've got to try to do things or say things to my little sisters when they're growing up and becoming teenagers and adults, which they might think is a bit cheeky."
But Luke also credits his mum with doing "absolutely everything", describing her as "a carer, a mum and a friend to people".
He said: "Every time I ever speak to someone, they will pull you to the side and say: 'How does your mum manage to do it?'
"There will be times she does I don't know how many hours at work, then comes home and stays up all night to look after my dad. Since day one she's always said: 'Don't stop, keep going.'
"She saw a flicker in my dad's eye and that was it."


Parkinson made 258 appearances for Middlesbrough during seven years with the Teesside clubEight years on from Parkinson's stroke, Deborah remembers "the very first day just like yesterday".
"Time goes fast," she said. "Gary has done a lot in eight years thanks to everybody, but it is our life, that's how we see it.
"I don't want to look back, I just look forward and if each day we can change something, that's brilliant."
Part one and part two of BBC Radio Lancashire's two-part series on Gary Parkinson is available to listen again on BBC Sounds. If you are affected by the issues in this article, help and support is available via the BBC Action Line http://www.bbc.co.uk/actionlineSource: bbc.com