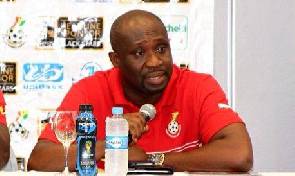 Vice-President of the Ghana Football Association (GFA), George Afriyie, has revealed that sometime ago, the perception in going to play a Black Stars friendly game is to rake in enough money that you can use to do somethinglucrative.

He said this in an interview on Kumasi-based Otec FM when he was answering questions on the amount Ghana get when they play in any friendly match.

In recent times, there has been extensive speculations about the amount of money the FA receive when they organize friendly games for the Black Stars.

Mr. Afriyie who doubles as the chairman for Okyeman Planners and Liberty Professionals, admits that perception is wrong.

He further decided to open up as he is well informed as far as friendly matches is concerned.

“Sometime ago, the perception is that when Black Stars are going to play every friendly match, you’ll get money that might be quite huge that you can even use to do something lucrative.

“That perception is wrong and when I use to be the Black Stars management committee chairman, when we play AFCON 2017 and maybe I might be getting 2 years, but am also fortunate to be an executive member since 2006 up till now, so everything that goes on as far as friendly matches is concerned am privy to it.

“My brother (Interviewer), I can share everything with you on your medium. Not long ago the Black Stars of Ghana played a friendly match with Canada at Washington D.C. with stadium capacity being about 60,000 or more.

“Unfortunately also for the Agent, he couldn’t market the match also to any television station and even people around United States and North America, even we (Ghanaians) in Ghana didn’t have the opportunity to watch the match.

“Even the Agent, I can stand here or sit in Ghana and tell you that he lost a huge chunk of money, even whatever he promised to give the FA, till now its been hard for him to pay and if you look at how much we pay to play international friendlies that everyone knows, mostly the biggest money that the FA can receive from playing an international friendly for which I know for been one of the biggest was Ghana against Japan in before somewhere two years ago and then maybe against Korea of which am not too sure and that was even before the World Cup in Brazil 2014.”

The experienced football administrator went ahead to reveal the amount the Black Stars rake in after every friendly game.

“All subsequent friendly matches the Black Stars have played they get $150,000 with maximum been $200,000, that amount every single appearance of Black Stars player in an international friendly plus their technical team is $5000. Am saying this on your radio station today so that if am lying you can call to check.

“It’s not that every Black Stars match we play, we get money. It has become necessary to use the friendly match to prepare your team, it is the only time a coach can have access to his team, to design other strategies and to also have the opportunity to look at other players. It is only when you have an international friendly matches.

“You want to play Hearts of Oak or Liberty Professionals, is that what you’ll use to ascertain the readiness of the team? No, a national team must compete with a national team to access its readiness. Secondly, remember that the FIFA Coca-Cola points system is also at stake, so if you don’t honour those international friendly matches your FIFA ranking also goes down.

“So because of that when there’s an international friendly you want to pick advantage of the friendly in other to raise your ranking. It’s not all about money.

“In most of these international friendlies, the FA lose a lot of money. Let me give you an example, Black Stars played Senegal in France, Black Stars played Mali in France and the people who were at the stadium didn’t reach 500 or 600 and were are you going to get the money?, Mr. Afriyie furiously quizzed.

“Black Stars international friendly it is not for financial gain’s, but for technical benefit and technical reasons,” he added.