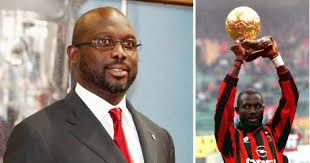 The Vice Chairman of Ghana' FA Cup Committee, Kofi Poku, says George Weah’s Presidential victory is a victory for all footballers in the world.

The former World Footballer of Year is the projected winner of Liberia’s Presidential run of poll sweeping 13 out of the 15 counties with his 73-year-old opponent Joseph Boakai getting only two counties.

Kofi Poku who is currently in Liberia as the right hand man of George Weah revealed the official declaration of results should be out as soon as 11:00am today.

Poku believes Weah has set a good precedent for Ghanaian footballers to follow, adding that it is possible for them now to dream and aspire of occupying the highest office of the land.