Get Down! Get Down! Rio Bus Carrying Journalist Hit By Gunfire 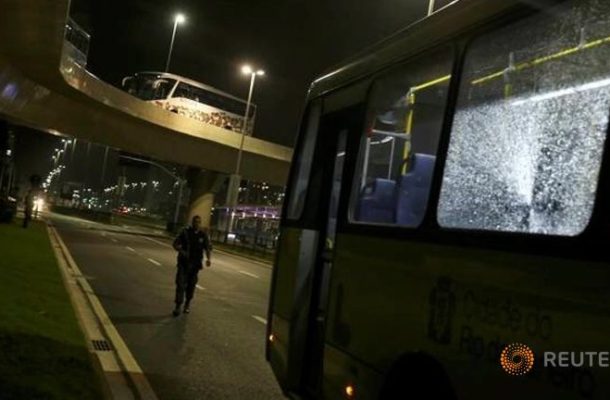 Passengers threw themselves to the floor after something hit the vehicle and blew out two windows. One US journalist later stated her belief that the bus came under fire from a handgun.
However, the news agency Agencia Brasil reported that other passengers believe the vehicle was hit by rocks.

Shattered glass lies on the seats of a media bus in Rio de Janeiro, Brazil, on Tuesday, August 9.
The incident happened on day four of the Games after the vehicle left the youth arena in Deodoro around 7:30 p.m. to make the 50-minute journey to the media center at the Olympic Park in Barra da Tijuca. About 10 people were on board.
Lee Michaelson, a retired US Air Force captain and basketball correspondent who was on the bus, gave a firsthand account of the incident in a blog for hoopfeed.com, the basketball website for which she writes. 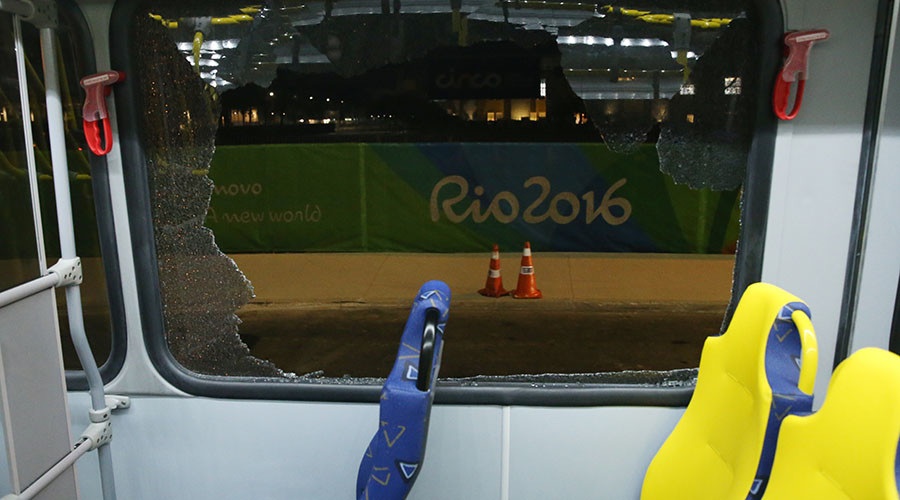 She said the bus "came under gunfire" while traveling along the TransOlympic highway, which was built for the Games.
"The highway is reserved for Olympic priority traffic until the Games are over, so we were moving along at a pretty good clip, making good time. That, and the fact that the shooter used a small-caliber weapon, probably a handgun, may well have saved our lives," Michaelson wrote.
"Roughly halfway back, I was texting my daughter about our dinner plans for the evening, when I suddenly heard two shots ring out in close succession. 'Pop, pop.' I am a retired Air Force captain, as well as former federal prosecutor; I own a handgun for personal protection, and have spent plenty of time on the range. I immediately knew we were taking small-arms gunfire.
"I instinctively got as low as I could to the floor, and yelled for others on the bus to do the same. There was no immediate reaction; I think people were stunned and confused."
'Everyone hit the deck'

As glass in two of the large windows on the bus began to shatter, she said, "everyone hit the deck" and the driver started slowing down to pull over.
According to Michaelson, a police officer boarded the bus after it stopped a couple of kilometers further up the road and examined the windows before the vehicle proceeded on to the Olympic Park without further incident.
Michaelson said Artur Zhol, a broadcaster from Belarus, suffered cuts to his hand from the glass and Kaan Korkmaz, an Olympic volunteer from Turkey, had a gash on his arm.
In a blog for pressball.by, the Minsk-based website he writes for, Zhol said the bus was passing through favelas as well as near overhanging cliffs, and he is not sure if the bus was hit by shots or rocks.
In a statement, the organizers of the Games shared details of the driver's report on the incident.
"When on the expressway Transolímpica, near Curicica, the driver heard a noise from inside the bus which he thought was photography equipment falling down," they said.
"Immediately, he looked in the rear view mirror and noticed that the passengers were lying on the ground. He continued to drive for a few meters until he saw a police car and stopped." 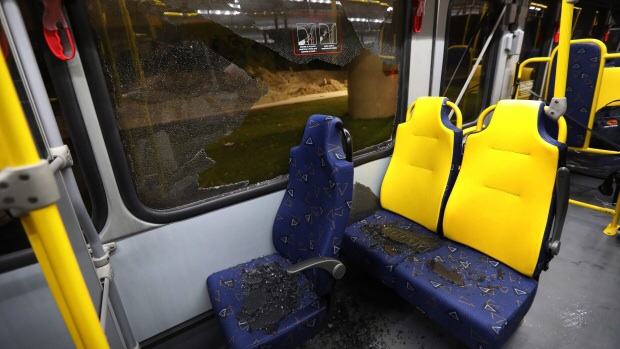 According to the organizers, the driver then noticed that two windows were broken, and resumed the route under the escort of the police car.
After arriving at the media center, he found that two passengers had minor injuries caused by broken glass. The driver is due to provide a statement to police, who will also inspect the bus.
Meanwhile, said the organizers, army and military police patrols are being increased in the area.