GFA assures Ghanaians they will deliver safe,peaceful venues for football 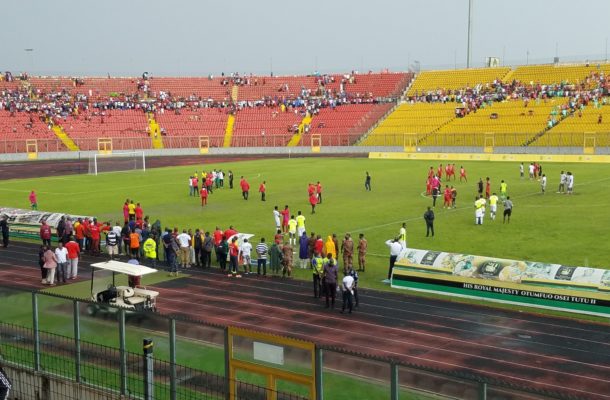 The Exco member condemned the shooting incident that went on last Sunday at the Baba Yara Sports Stadium when Kotoko played against Berekum Chelsea.

The Medeama board chairman says that football is supposed to unite factions and not to cause disharmony and has warned fans who throng our various stadiums to be decorous.

Investigations into the shooting incident has begun by the Ashanti Regional Police with the said Policeman who shot the Kotoko fan interdicted.

Dr. Aubyn says hooliganism has no place in the modern game and that the new GFA is bent on creating a condusive environment that will help create wealth and ignite passion in the game.

He however warned all persons who go to the stadium to put up their best behaviour as the GFA will not hesitate to sanction venues,clubs and individuals who perpetuate such chaos.

"The GFA promised to deliver football to Ghanaians for them to enjoy the game in peace and safety and it's for this reason the GFA is livid about the shooting incident that occurred at the Baba Yara Sports," he said.

Kumasi Asante Kotoko have in the interim been banned from using their home venue at the Baba Yara Sports Stadium even before the FA looks into the case.