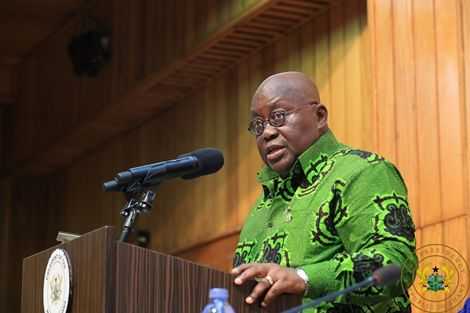 President Akufo-Addo has insisted that Ghana should not and cannot be poor given the abundant natural resources bestowed on it by nature.

According to him, in spite of the challenges facing the country, it’s not Ghana’s destiny to be poor.

“We have some of the most dramatic, natural scenes on the planet.

“In spite of our current circumstances, I believe our lot is not to be a poor nation. God has blessed our Ghana. We have some of the most dramatic, natural scenes on the planet. We have, almost, every mineral that mankind lusts after, and which is required to run a modern economy. “We have an abundance of arable land, and a young, enterprising, hardworking population.”

President Akufo-Addo made the remarks at the International Luncheon of the National Prayer Breakfast in Washington in the United States (US) recently.

The President indicated that it was about time Ghana works to dispel the often negative depiction of the country and other African countries characterized by famine, diseases and other negativities.

“The negative characterizations of Ghana, and indeed most of the countries in Africa, depicted largely by stories of disease, famine, hunger and poverty, can, therefore, not be our portion. God’s blessings on our land means that we can, we should, and we must shed this cloak of poverty, and chart for ourselves a path that will lift up the masses of our people into prosperity and enhance the quality of their lives,” President Akufo-Addo stressed.

The President also indicated that the New Patriotic Party (NPP) government, since taking over two years ago, has restored discipline in the management of the economy, which is currently one of the fastest-growing economies in the world.

He mentioned that his administration has improved access to education and healthcare for all.

“We are becoming increasingly self-sufficient in the production of food, and as opposed to the difficulties of recent years, we are now exporting food to our neighbouring countries in West Africa, Ghana, today, has become the largest recipient of foreign direct investment in West Africa, with some of the world’s largest automobile manufacturing companies deciding to establish assembly and manufacturing plants in Ghana,” President Akufo-Addo added.

He also used the occasion to recount the bitter experience of slave trade some 400 years ago during which Africans were traded for cheap labour in the Americas and across Europe.

“We should, in our prayers on this occasion, make a special intercession for God’s blessings on the souls of the hapless victims, and for His forgiveness for the perpetrators of these heinous crimes,” the president added.