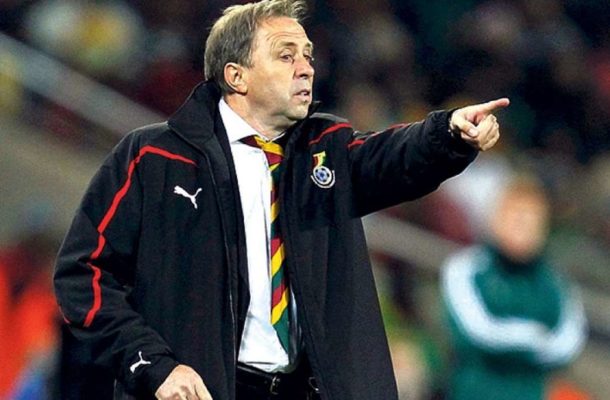 Ghana is close to confirming the return of Serbian coach Milovan Rajevac as replacement for C.K Akonnor.

Former Black Stars coach Milovan Rajevac has been linked with a return to his old stomping grounds following the departure of C;K Akonnor.

Ghana is on the haunt for a replacement for the former Kotoko, Hearts trainer who was sacked on Monday 13th September,2021.

The 3 member committee have been in touch with the Serbian coach with the only details remaining is to inform the GFA who will in turn inform the paymaster that is the Sports Ministry for the salary negotiations on a two year contract.

Since the position became vacant, there has been more than 70 application letters brought in by coaches from across the world.

Authorities are of the conviction that If they do not act fast it will be too late for Ghana to turn things around in the 2022 World Cup qualifiers.

A three member committee headed by the vice president of the Ghana Football Association(GFA), Mark Addo has been tasked to find a new coach with in 72 hours.

With Milovan Rajevac's experience and knowhow of the  African continent, it is believed he can turn around the fortunes of the ailing Black Stars.

Several high profile coaches have tendered in their application with the Serbian among those interested in the Ghana job.

The Serbian coach qualified the Black Stars to the 2010 World Cup in South Africa.

The Black Stars exited the tournament in the quarter final stage under Milo before he resigned from the job to coach Saudi side Al Ahly Jeddah.

The Serbian coach rejected a four year contract from the Ghana FA to go sign for the Al Ahly Jeddah.

Milovan is currently unattached and is the favorite to be considered for the job.