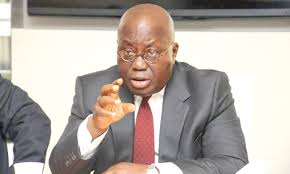 Ghana President Akufo-Addo will be boosted by the report

Ghana's economy will be among the fastest in growth in the world in 2018, massively improving the lives of the citizens of the West African country, a major global economics report sighted by Ghanaguardian.com has revealed.

The report comes as a massive boost for President Nana Addo Dankwa Akufo-Addo and his ruling NPP government as they have come in for criticism for a sluggish economy since sweeping to power 12 months ago.

The West African country's economy will grow even faster than that of China which has been predicted would grow by 6-7% in 2018, the report in PwC’s Global Economy Watch for 2018 predicted.

This means Ghana's economy will grow bigger than 7% as strong economic policies put in place by the NPP government begin to make the desired impact after a shaky take off.

Amongst the 17 economies that will grow faster than China are India, Ghana, Ethiopia and the Philippines, pointing to broader based growth in Africa and Asian economies.

Eight of the ten fastest growing countries in 2018 could be in Africa according to PwC’s analysis with Ghana leading the charge in improved economies the report seen by www.ghanaguardian.com claims.

With the fastest level of growth for several years, 2018 is predicted by PwC to be the most energy hungry on record too which shows the Ghana government must prepare for the demands for energy in the country.

Almost 600 quadrillion British Thermal Units of energy could be consumed by the global economy in 2018, the highest level on record and double that of 1980.

India and China alone are expected to consume 30% of global energy.

Despite this, PwC’s outlook predicts oil prices are set to remain broadly stable in real terms, with OPEC and its allies extending its 1.8 million barrels per day supply cut until the end of next year.

The global economy is set to grow by almost 4% in 2018 in purchasing power parity (PPP) terms, adding an extra $5 trillion to global output at current values, according to new projections in PwC’s Global Economy Watch.

The main engines of the global economy – the U.S., emerging Asia and the Eurozone – are expected to contribute almost 70% of economic growth in 2018 compared to their post-2000 average of around 60%.

Growth in the Eurozone is predicted to be above 2% in 2018, as PwC expects the peripheral economies to outpace the core for the fifth consecutive year.