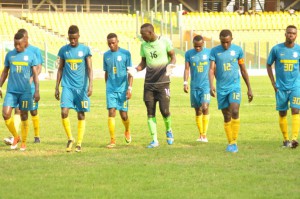 The Wa-based side are top of the table with six games to end the season.

All Stars have impressed heavily this season, culminating in a massive self-believe they could clinch a historic Premier League crown this term.

And the country's football federation president, who doubles as the owner of the club has backed his side to win the ultimate.

“We should see a new winner for the league every year," he told Kumasi-based Nhyira FM

“Football is the only unscripted grammar and if people go into games with known or predictable results or outcomes.