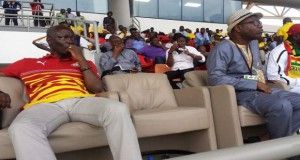 The Ghana FA has presented a blank budget to the country's sports ministry, just days before the crucial 2018 World Cup qualifier against Uganda to escalates the feud between the two bodies, GHANAsoccernet.com can confirm.
The country's federation appear fed up with constant accusation of inflating figures for Black Stars matches and want the ministry to draw up its own budget for the qualifier.

The stand-off between the FA and the ministry has overshadowed the game against the Cranes at the Tamale stadium on Friday.

The documents from the FA which included hotel accommodation, feeding,  flight arrangements and other items did not have the cost components attached to it.

"The Black Stars does not belong to the GFA. We are only supporting the minister. We have been ridiculed and accused of being corrupt unduly and so we have presented the document to the ministry so they can fill in the figures," he said

"We have no problem with the minister but we have not been happy with his public utterances.

"Anytime we draw up a budget, we are viewed as thieves and so we want them to do their own thing.

"Infact he (minister) has met the players before without informing us. I also read in the media. So I'm sure he can draw up his own budget. We are only here to help as a federation."

The country's sports minister Nii Lantey Vanderpuije has consistently claimed the Ghana FA spends $1 million on each Black Stars game - a claim which has been rubbished by the federation.

The massive power-play between the two parties are well documented as it has taken the shine off the 2018 World Cup qualifier against Uganda on Friday.

As the Cranes take on Togo in an international friendly on Tuesday, both the FA and the sector minister are embroiled in media war with fears it could cripple the country's chances of making a fourth successive appearance at the World Cup in Russia.