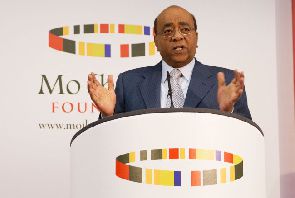 Ghana has retained its rank of 7th in the 2015 Mo-Ibrahim Index but recorded a decline on three of four indicators over the last 10 years.

The Index seeks to assess the performance of countries by looking at the extent to which it meets the expectations of citizens politically, socially and economically.

Mohammed Ibrahim, the Chairman of the Mo-Ibrahim foundation presented the findings Monday.

On Ghana's performance in the field of governance, Ghana placed 7th on overall governance, even though Ghana scored 63.9 out of 100 for the year under review, the trend for the past decade saw a decline of 2.1.

In other areas like sustainable economic opportunity, Ghana placed 15th with a score of 39.1 but the decade trend reveals a decline of 4.2.

In the area of safety and rule of law, Ghana scored of 70.0 placed the country as 6th but then again the decade trend shows there has been a decline of 2.6. Mr Ibrahim, however, commended African countries for doing more for rural development.

Mo Ibrahim is a Sudanese businessman who developed the governance index.