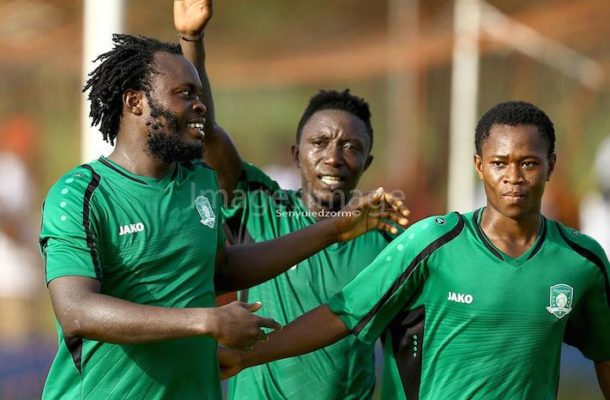 The Fire boys hope to beat the Blues to hold their title ambitions very tight before they travel to Kumasi to face Asante Kotoko on Wednesday in a top clash.

Right back and captain Godfred Saka has recovered fully from a sickness which saw him sit on the bench against Sekondi Hasaacas last Sunday.

He makes a return to the starting line-up this Saturday.

Nathaniel Asamoah is also expected back on field in the regional derby since he picked up an injury against Dreams FC a fortnight ago.

He has played once and scored once at home for Aduana Stars since joining them.

They have 30 points, four points away from the drop zone.

Stalwart defender Nicholas Opoku to make a comeback to the starting line-up for the Blues on Saturday.

He was benched against Liberty Professionals last Sunday.

The 2011 league champions are going into the game with a full squad for coach Solomon Odwo to select from on Saturday.

*Berekum Chelsea have drawn blank in their last fifteen premiership matches at away.
(W0 D2 L13)

*Each of the teams have won twice of their last five meetings in the premier league with just a draw.

*Berekum Chelsea are winless in their six visits to Aduana Stars in the premier league.
(W0 D2 L4)

*Aduana Stars have kept seven clean sheets out of their eleven home games in the premiership this current campaign.

*Berekum Chelsea have conceded in thirteen of their last fifteen away matches in the premier league.