Ghanaian Clubs Out Of Top 30 In Africa Ranking 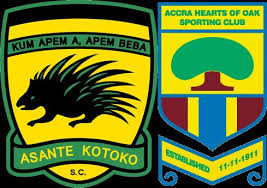 No Ghanaian club made it in the Top 30 of the club-football rankings in the continent, according to FootballDatabase.

Asante Kotoko are the highest Ghanaian club in 35th position after dropping 29 places on the latest ranking released on 08 August.

Berekum Chelsea slipped down 58 places to finish in 71st position.

Hearts of Oak are ranked 98th in the Africa.