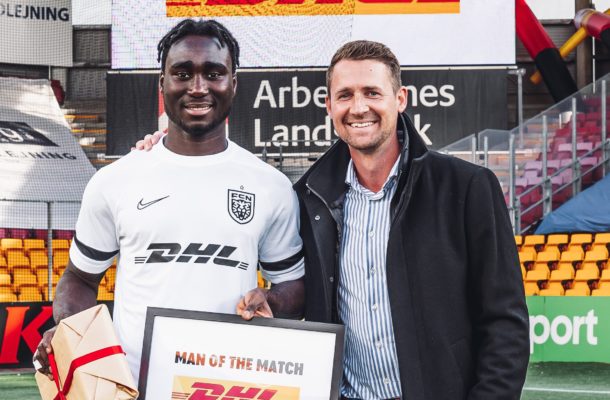 Young Ghanaian goalkeeper Emmanuel Ogura turned heads with his performance for FC Nordsjaelland on Sunday in their 2-2 drawn game against FC Midtjylland.

The 19 year old was handed his second consecutive start for his side and he did not disappoint with his performance.

Despite conceding two goals the young goalkeeper was named the man of the match after his string of saves for his side preserved a point.

After recess the away side upped the ante and pulled one goal back in the 48th minute with Junior Brumado the goal scorer before Victor Stange Lind pulled parity for FC Midtjylland in the 62nd minute of the game.

He became the first Right to Dream goalkeeper to play first team football for FC Nordsjaelland on his debut last month in their 5-1 defeat to FC Copenhagen .

It was a hectic experience for the 19-year-old Ghanaian who conceded five goals on his debut.

Ogura got his big break after an unfortunate incident to his teammate Dudu who got injured during the warm-up in their match against FC Copenhagen and then the Ghanaian goalkeeper had to prepare quickly and pull on the yellow goalkeeper jersey with number 16 on his back.