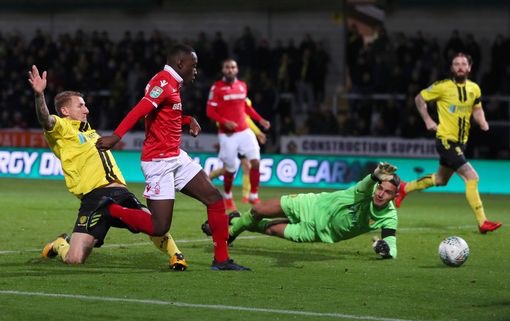 English born Ghanaian youngster Arvin Appiah marked his senior debut at Nottingham Forest with a goal against Burton Albion in the EFL Cup.

The 17 year old made his presence felt when he came on in the 84th minute to replace Liam Bridcutt by scoring just six minutes into his debut despite suffering a 3-2 defeat.

An own goal from Saidy Janko and one from Scottish midfielder Scott Fraser put League One Burton in the driving seat to spare the blushes of Liam Boyce, who missed a first-half penalty, before substitute Lewis Grabban pulled one back.

Jake Hesketh made sure with a stunning volley in the 82nd minute before Arvin Appiah pulled one back for Forest in added time.

Championship side Forest,  made 10 changes to Saturday’s 1-1 draw against Leeds United as they looked to reach the last eight for the first time since 1995.
-GHANAsoccernet.com