Ghanaian soldier who died in Bronx fire to receive medal 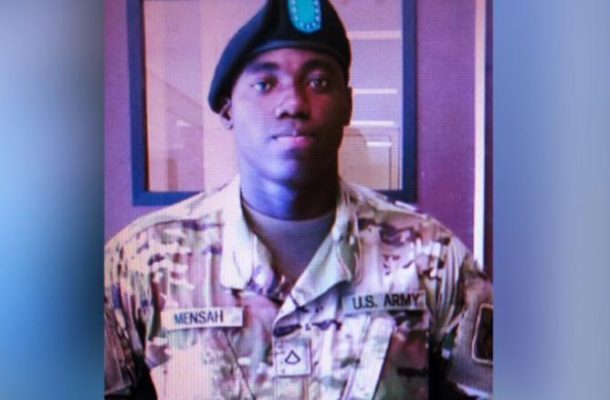 Ghanaian born army soldier, Emmanuel Mensah, who died in a Bronx fire after saving four people will be posthumously awarded the Soldier’s Medal by the United States Government.

The 28-year-old who was caught in the fire while trying to save the last batch of people after rescuing many from the inferno that ravaged the Belmont apartment building is expected to be honored with the Army’s highest award for heroism that occurs outside of combat — according to the New York Army National Guard..

Emmanuel Mensah, who had previously lived in the building that caught fire was visiting home after completing military training in Virginia, officials said.

Mensah was a permanent legal resident, whose family had immigrated to the United States from Ghana.

“Private First Class Emmanuel Mensah was many things: a soldier, an immigrant, a first-generation American, a New Yorker — but above all else he was a hero,”  U.S. senator Chuck Schumer said in his Friday statement.

“His courage, sacrifice and utter selflessness in the face of mortal danger during the tragic fire in the Bronx uphold the highest standards of the United States Army and make him a worthy example for every American to follow.”

U.S. Sen. Chuck Schumer wants the Army to posthumously honor a U.S. soldier and native of Ghana who raced repeatedly into a burning New York City apartment building, saving four people before he died in flames that also claimed a dozen other lives.

Mensah’s recruiter, Staff Sgt. Ruben Martinez-Ortiz, echoed the sentiment that the young soldier represented the best the Army has to offer.

“I knew from the moment I met him his heart was as big as our National Guard family,” Martinez-Ortiz said. “He was ready to serve our nation and community. Pfc. Mensah was the embodiment of what our Army Values stand for.”