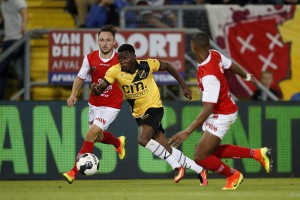 Ghanaian teen striker Thomas Agyepong is available for NAC Breda ahead of their KNVB cup match against VVV Venlo on Tuesday evening.

The 19-year-old, on loan from Manchester City, picked up an injury two weeks ago.

He suffered the setback during his side 0-0 stalemate against Don Bosch.

But the hugely talented Ghanaian has recovered from the setback and will be available for selection against VVV Venlo later on today (Tuesday).

NAC Breda coach Marinus Dijkhuizen will be excited by the return of the striker who has impressed heavily since joining.