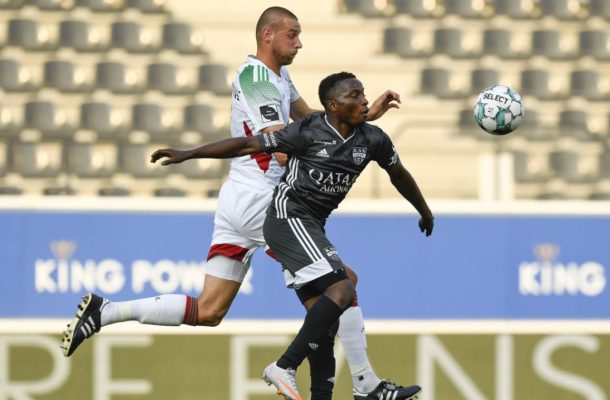 Ghanaian youngster Isaac Nuhu continued his great form for his Belgian Jupiler Pro League side KAS Eupen as he scored in their 1-1 draw against Zulte Waregem on Saturday.

The home side Eupen started the game in good fashion but could not find the break through as the away side defended in blocks.

Their dominance could not result into goals as the away side Zulte Waregem took the lead against the run of play after a foul in the box resulted in a penalty which was converted by veteran Belgian  striker Jelle Vossen in the 35th minute of the game.

Four minutes later the 20 year old Ghanaian forward gave his side the equalizer with a crisp finish to make it 1-1.

The youngster who was yellow carded lasted the entire duration of the game after scoring his first goal for KAS Eupen in 13 matches.

He joined KAS Eupen in January 2020 from the Aspire Senegal Academy and has a contract until 2025.

Compatriot goalkeeper Nurudeen who has earned a Black Stars call up started and played the entire duration of the game.