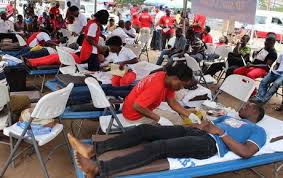 Mr Richard Quartei Quartey, the Auditor General has called on Ghanaians to liaise with the National Blood Bank (NBB) to promote voluntary blood donation to replenish the Bank.

He said an effective collaboration between the two bodies would be a national exercise that would help to support the NBB at all times and not only in crises.

Mr Quartey also called on social clubs to include and address issues of blood donation in their programmes as that would also contribute extensively to the provision of blood to the bank.

Mr Quartey made the call on Friday in Accra when the Audit Service held a blood donation exercise as part of activities making this year's Annual Accountability Lectures, aimed at sharing knowledge with stakeholders.

He said over the years, the Audit Service had been organising the annual lectures with concentration on good governance and accountability issues and 'Management thought it is wise to make the seventh edition a landmark in terms of the blood donation exercise.

'This is our first time of undertaking this initiative and hopefully, we will add another initiative to increase the visibility of the Audit Service in the society in subsequent years,' he said.

Speaking to the Ghana News Agency, Reverend Joseph Kingsley Ghunney, the Director of the Public Affairs Unit of the Audit Service, said the exercise formed part of the institution's corporate social responsibility and a preparatory event aimed at supporting a worthy course.

'Every strong person must see it as a duty to donate blood when the opportunity is given to save mankind as everybody is subject to human failings,' he said.

Rev Ghunney said the target was to get 100 voluntary donors to make the exercise a success with 100 units of blood also being targeted.

Mrs Akosua Brefowaa Okyere-Keelson, the Blood Donor Organiser of the NBS at Korle-Bu, lauded Management and Staff of the Service for the kind gesture.

Mrs Okeyre-Keelson said: 'Blood is life and could not be manufactured and so the donation exercise was appropriate.'

On the public perspective towards blood donation, she said the NBS is trying to erase the myths concerning blood donation through education and sensitisation among the public and it is yielding positive result especially when the public contribution had been extensive.

'And with time they will get to understand that blood donation is an act of giving,' she said.

Mr Richard Asiedu, the Deputy Auditor General said the exercise that is opened to the public to help raise awareness and bring people to donate.

Mr Johnson Akuamoah Asiedu, the Deputy Auditor General in-charge of Finance and Administration thanked the donors for the patronage saying: 'This is a lifesaving activity that wipe tears from the eyes of sorrowful families.'