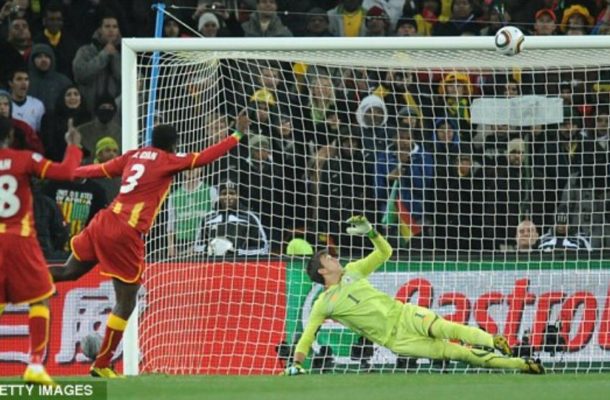 This was after he missed a penalty that would have sent Ghana to the semi-finals of the World Cup for the first time in South Africa.

Luis Suarez handled a goal bound header right on the line and Gyan had the simplest task of converting from 12 yards only to hit the crossbar with that decisive kick.

It would have been the first time an African team had made the semi finals of the World Cup.

"No, no, they still haven't forgiven him [Gyan]. You know that Ghanaians do not forgive. We do not forgive," Aidoo told FootMercato.

"The day he missed the penalty, the Ghanaians went to his mother's house and harassed her. His failure had consequences on his mother's health after that, it was really sad.

"So his mother told Asamoah to never take a penalty in his life again. This is why you will never see Asamoah again venture to take a penalty because he promised never to risk it again. And now that his mother is 80 years old, I think he is following her wish."

Aidoo, however, did not see fault in Gyan's miss, claiming he did his best.

The pallbearer though - who is known for a successful funeral business in Ghana and noted for dancing while carrying coffins - which subsequently became a meme on social media, does not watch the Black Stars anymore.

"You know, someone has to lose in order for someone to win," Aidoo continued.

"So for me, I think it's normal. I think he did his best. We are only spectators. If you are not on the field, it is because you do not have the level, so you cannot judge.

"If he [Gyan] is there, it is because he has a good reason to be there and we must encourage him, whether he is good or bad. I do not blame him.

"You pay them, you believe in them, but in the end, they lose. I don't watch them anymore, I wait. If they win then I will rejoice and if they do not win I will go about my business."

After Gyan's miss, Suarez was seen jubilating in the dugout, something that irks Ghanaians and have since associated his name with bad luck.

Aidoo is a staunch Barcelona fan and he does admit his has divisive feelings due to Suarez's presence at the Camp Nou where he has been since 2014.

"Whenever I see this player, even when I hear his name, this Suarez, if I hear that name, I am sad. Because a hand from this Suarez sent the guys home and made my Ghana team return home without being able to play in the semifinals, which is dramatic.

"We have a saying here for Suarez. The name Suarez means the impossible.