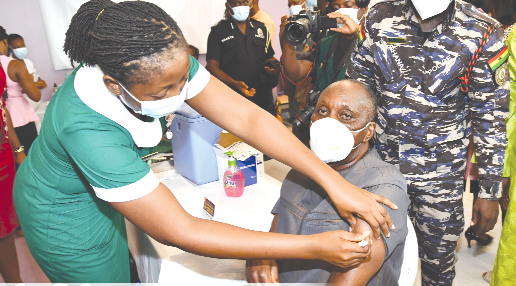 The Ghana Health Service, in collaboration with the United Nations (UN) in Ghana, launched the COVID-19 vaccination programme in Accra yesterday (March 2, 2021).

This opens the gates for qualified members of the public to step forward and take the vaccine, a preventive measure to complement the safety protocols against the spread of COVID-19 and also reduce the rate of deaths.

A total of 3,321 people took the COVID-19 vaccination when the exercise started yesterday.

Health workers topped the number of those vaccinated with 1,928, followed by members of the security services with 443, traders at 323, with members of the Executive arm of government following in fourth place with 198.

Other groups include the Judiciary, legislators, education personnel, media, farmers and persons classified as unemployed.

Ninety-seven per cent of those vaccinated were in urban areas.

The government has authenticated two vaccines, Covishield and Sputnik-V, for use locally.

The Minister-designate for Greater Accra, Mr Henry Quartey, was the first to offer his arm for the shot, after which key personalities, including the Chief of Staff, Mrs Akosua Frema Osei-Opare; the Director-General of the Ghana Health Service, Dr Patrick Kuma-Aboagye, and the Presidential Advisor on Health, Dr Anthony Nsiah Asare, took turns to take theirs.

Others who took the jab were members of the Council of State, including its Chairman, Nana Otuo Siriboe II, Mr Sam Okudzeto and Mr E. T. Mensah.

The Minister-designate for Health, Mr Kwaku Agyemang-Manu, was also vaccinated at the Korle Bu Teaching Hospital.

President Nana Addo Dankwa Akufo-Addo and his wife Rebecca were the first to take the vaccine after which the Vice President, Dr Mahamudu Bawumia, his wife, Samira, and the Military High Command took the jab to assure the public of its safety.

At the Greater Accra Regional Hospital at Ridge, where the launch was done yesterday, a number of elderly people, traditional leaders, government officials, United Nations officials in the country were seen trooping in with excitement and eagerness to take the jab.

The first phase, which began yesterday in 43 districts in three regions, will end on March 15, 2021.

Per the national guidelines, beneficiaries are expected to be given the second dose between the next eight and 12 weeks.

Addressing the audience at the launch, the UN Resident Coordinator, Mr Charles Abani, commended the government for the great leadership it had shown in the management of the global pandemic which, he said, included working to ensure Ghana became the first to take delivery of vaccines under the COVAX arrangement.

That, he said, was no surprise because the country had always led the way and shown leadership in many things.

Underscoring the critical role of partnership in development and quality healthcare delivery, Mr Abani commended the country for partnering key international organisations that had facilitated the current milestone in reducing the COVID-19 burden in the country.

“We thank the government for including the international community resident in the country in the exercise. It is a good idea because no one is safe until we are all safe,” he said.

Assuring the population of how safe and efficacious the vaccines were, Mr Abani appealed to all members of the public to take advantage of the opportunity when it came to their turn.

He said vaccines had been proven to be one of the most effective ways to stop the disease burden.

Even after getting vaccinated, Dr Kuma-Aboagye called on the public not to abandon the safety protocols.

He explained that although the vaccines were efficacious, people would have to complement their immunity against the disease with the wearing of the face mask, adhering to hand and respiratory hygiene as well as social distancing.

“It is not yet over until the global community gives a green light based on scientific evidence on when we can lose our guard on the face mask-wearing. But until then we must continue to adhere,” he said.

He said while the second wave had presented with high sickness rate, severer or oxygen dependent cases, among others, thankfully, the country had a more effective way of dealing with the dire ramifications of the second wave.

The Greater Accra Regional Director of Health Services, Dr Mrs Charity Sarpong, who officially launched the programme on behalf of the GHS, said the exercise was very welcoming, particularly, for the Greater Accra Region that had the highest infection rate and disease burden, since the country’s outbreak on March 12, last year.

She described the use of vaccines as a game-changer and appealed to all to take advantage of the opportunity.

When the Daily Graphic visited some vaccination centres after the launch, it was observed that a number of health personnel were taking the jab with so much enthusiasm.

Many were requesting their friends to take a picture of them taking the jab so they could post on social media to encourage others to follow suit.

At the Accra Psychiatric Hospital, the Public Relations Officer, Dr Susan Seffah, said 25 health officials had gone through the process barely three hours after it started at the facility.

From the Lapaz Community Hospital, Rebecca Quaicoe Duho reports that vaccination for the staff of the hospital, health personnel and security personnel in the surrounding communities started around 9 a.m. with the Medical Director of the facility, Dr Mrs Joy Tettey, being the first to take the jab.

In an interview with Ms Kwakyewa, she said they were expecting a total of 200 people to take the jab a day.

She said so far the response from the personnel in the community was good and encouraged all to take the vaccination when it got to their turn.

From the Ga Central Municipal Assembly, Charles Andoh reports that the process began with the Member of Parliament for the Anyaa-Sowutuom Constituency, Dr Dickson Adomako Kissi, being the first to take the jab.

He was followed by the Municipal Chief Executive, Dr Emmanuel Lamptey, and the Municipal Health Director, Dr Esther Odame Asiedu, at about 10 a.m.

Some health personnel, security personnel and other officials of the municipal assembly were also inoculated at the Ga Central Municipal Health Directorate, which has received 7,000 doses of the vaccine.

The target groups under phase one include frontline health workers, adults aged 60 years and above and people with underlying health conditions such as diabetes, kidney diseases, hypertension and cancer.

According to the national vaccination plan which is guiding the exercise, at least 20 million of the Ghanaian population will be vaccinated towards the delivery of 60 per cent herd immunity.