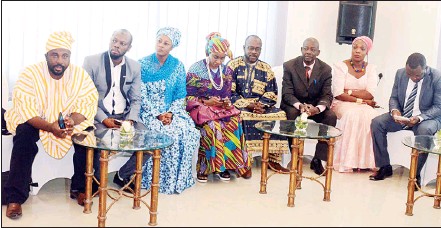 Some of the invited African diplomats.Some of the Ghanians who attended the event.

Ghana's Minister of Foreign Affairs Shirley Ayorkor Botchwey is calling for stronger ties with Kuwait following the official opening the country's embassy in the Asian country on Monday, urging her fellow countrymen to abide by the law in the Gulf State, Ghanaguardian.com can report.

Kuwait’s Deputy Prime Minister and Foreign Minister Sheikh Sabah Khaled AlHamad Al-Sabah, who attended the ceremony in Kuwait City, praised the strong relations between the two friendly countries, which have entered their 44th year since the establishment of official relations between them.

He stressed that the two countries attach importance to strengthening the existing bilateral relations at all levels in order to consolidate and strengthen the bonds of close relations between them.

The ceremony was attended by Kuwaiti Deputy Foreign Minister Khaled Al-Jarallah and senior officials of the Foreign Ministry of the two friendly countries, members of the diplomatic and consular corps accredited to the State of Kuwait.

Also present on the occasion were the Dean of the Diplomatic Corps in Kuwait, the Ambassador of Senegal; His Excellency Ahmed-Rufai Yahaya Iddi, ambassador-designate of Ghana to Kuwait, the embassy staff, African ambassadors accredited to Kuwait, staff and officials of Kuwait’s Ministry of Foreign Affairs, representatives of the Ghanaian community in Kuwait.

Speaking to the gathering Ayorkor Botchwey said, “It gives me great pleasure to be here today to perform the official opening ceremony of the new embassy of the Republic of Ghana in Kuwait.”

She said, the event marks an important milestone in the diplomatic relations between the Republic of Ghana and the State of Kuwait which dates back to the period when the Ghanaian embassy in Riyadh, Saudi Arabia, was concurrently accredited to the State of Kuwait.

She went on to say, due to the increasing political and economic relations between both countries, Kuwait opened its embassy in Accra in 2015 and it is for the same reason Ghana decided last year to establish a resident diplomatic mission in Kuwait at ambassadorial level to accelerate the diplomatic, economic, investment and trade ties between Ghana and Kuwait.

Kuwait, which has made giants strides in economic development and taken concrete steps to strengthen its ties with the rest of the world, particularly African countries, has been designated a strategic partner for Africa’s development by the African Union, she added.

It is worth noting, she said, that in 2013, Kuwait hosted the third AfroArab summit in which Ghana among the other African nations, participated. The summit produced the Kuwait Declaration which paved the way forward towards fruitful cooperation between the Arab countries including Kuwait and Africa.

There is no doubt, she added, that “today through the instrumentality and the desire of the government and the people of Kuwait to open up to Africa, many African countries have deemed it expedient to open resident diplomatic missions in Kuwait to explore the vast potential and opportunities that exist between various African countries and Kuwait. This move will advance mutually beneficial cooperation in various spheres of endeavor between African nations and Kuwait.”

Following the opening of the Kuwaiti Embassy in Accra and today’s ceremony of the opening of the Ghana embassy in Kuwait, she said, the Ghana-Kuwait relations will be further expanded, strengthened and consolidated and raised to greater heights for the mutual benefit out both countries and their peoples.

Madam Botchwey advised the Ghanaians in the country to abide by the law and prove themselves as worthy ambassadors of Ghana to keep intact the friendly relations and cooperation that exist between Ghana and Kuwait.

Since, there is a growing population of Ghanaians and the Ghanaian students in various parts of Kuwait and with the attendant consular and welfare challenges faced by them, the opening of the embassy of Ghana in Kuwait, therefore, is timely and opportune to address some of the concerns of “our two countries emanating from the significant number of Ghanaians living in Kuwait,” she said.

“I am aware the opening of the new mission is no easy task. I am also aware of the essential roles played by various entities that have culminated in the successful opening of the Ghana Embassy. In this regard, I wish to thank the Amir and the government of the State of Kuwait particularly, the Deputy Prime Minister and Minister of Foreign Affairs and his able staff at the Ministry of Foreign Affairs as well as the various government agencies in Kuwait, who have made immense contributions in various ways towards the opening of the new Embassy.

“I also wish to express my appreciation and gratitude to the Dean of the Diplomatic Corps, the Ambassador of Senegal and other African embassies already established here, particularly the embassies of Senegal, Nigeria, Togo and Niger among others who opened their doors to the advance team from Ghana and assisted them in the spirit of African solidarity to facilitate the opening of the new mission. I am extremely grateful for the gesture.”

She went on to say, “I am confident the ambassador-designate and the staff of the embassy are capable of delivering efficient and competent services to enhance Ghana-Kuwait relations and cooperation for our mutual benefit and to justify the resources invested in opening the new embassy.”

She said it was fervent hope that the opening of the mission will not only foster closer cooperation and collaboration between Ghana and Kuwait both at the bilateral and multilateral level, but also will bring the African embassies and ambassadors in Kuwait closer to brainstorm and share experiences and best practices towards mutually beneficial relations and cooperation between various African countries and Kuwait and to strategize on the way forward to engage Kuwait to help us execute our ECOWAS integration projects and the AU agenda 2063.

She thanked the Deputy Prime Minister and Minister of Foreign Affairs of Kuwait and all those present for gracing what she called the “momentous occasion”.