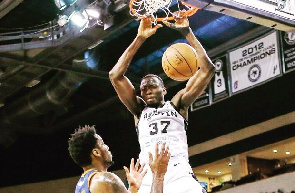 Ghana's NBA star, Amida Brimah was in action when Austin Spurs lost 122-125 to Agua Caliente Clippers in the NBA Gatorade League in a game played earlier today at the HEB Center in Austin.

Amida Brimah scored 10 points as a starter for Spurs but missed out on a double-double as he added nine rebounds to his tally.

A double-double against the Clippers would have been his third straight mark in what is turning out to be a good start to the season.

Brimah also pinched in two blocks and three assists in 31 minutes joining three other teammates to score in double digits in the loss.

The loss snaps a three game winning run by Spurs which gives Austin five wins in 10 games this season. Dropping a game to the Clippers comes ahead of tonight’s matchup against Salt Lake City.