Go for police extract, if you misplace your ID card – NIA urges Ghanaians 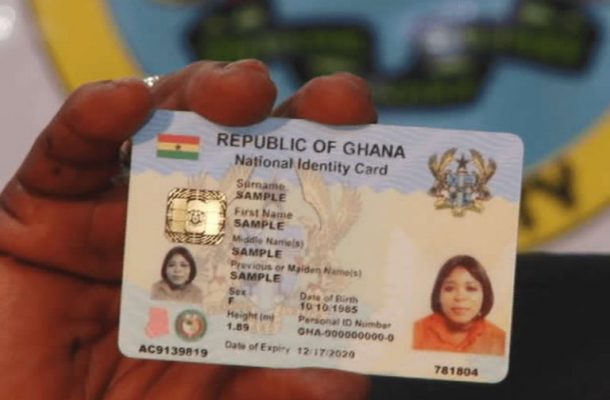 The Sunyani District Registration Officer of the National Identification Authority (NIA), Daniel Agyei Kyeremeh, has advised Ghanaians who have misplaced their Identification (ID) cards to go for Police extract before a new one is replaced.

He reminded applicants’ replacement of cards and premium service attracted charges, but added registration for new cards was free of charge.

Mr Kyeremeh also advised applicants whose cards were still with the Authority to be patient, saying, the NIA offices had become operationalised nationwide and all applicants and new ones would receive their ID cards.

In an interview with the Ghana News Agency (GNA) in Sunyani on Monday, Mr Kyeremeh said the Sunyani District Office still had more than 12,780 identification cards and assured that all the cards would be issued by March 2022.

“There is no cause for alarm because the NIA has come to stay and we would ensure that everybody has his/her NIA ID card,” he stated, saying, his office had so far issued 1,657 cards since November, this year.

Mr Kyeremeh expressed concern about inadequate staff, saying the four staff at the office was not enough to facilitate speedy registration and issuance of the ID cards.

Meanwhile, the unusual crowd that characterised new registration and issuance of the ID cards in parts of the country was absent, when the GNA visited the Sunyani District Office, which is located within the premises of the Sunyani Office of the Ghana Revenue Authority (GRA).

Many applicants who were, however, sighted were patiently waiting in queues with some of them sitting on benches and chairs.

In that regard, Mr. Keyeremeh explained his outfit had made applicants understand the office had the capacity to issue 100 cards on a daily basis, saying, “we rescheduled applicants if the numbers are becoming crowded.”

He commended the applicants for adhering to the COVID-19 protocols, indicating the office had resolved not to attend to applicants who failed to wear nose masks.

Mr Kyeremeh said plans were far advanced for the office to obtain a new and permanent office at the premises of the Sunyani Municipal Assembly, and expressed appreciation to the Assembly and the GRA for their continuous support.