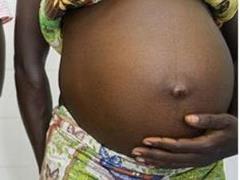 More than 20 teenage pregnancy cases are recorded every year among school girls who write the Basic Education Certificate Examination (BECE) in the Gomoa West District of the Central Region.

Ms Alberta Bruce, District Education Officer made this known when she addressed school children as part of the activities marking International Girl-Child Day at Apam .

The day was marked in collaboration with Gomoa West Girls Education Unit and CAMFED Association (CAMA) of Gomoa West District.

Ms Bruce said the situation was worrying since most of the brilliant girls education had been truncated as a result of teenage pregnancy phenomenon.

The school children and CAMA members and officials of Girls Education Unit marched through principal streets of Apam.

Some of the placards carried by the school girls read: 'Give me your pen not your penis,' 'Stop teenage pregnancy,' ' Say no to early marriage,' 'Help the Girl-Child education,' Pay my school fees and not my bride.'

The CAMA Girls donated six pints of blood to the Apam Catholic Mission Hospital as part of the activities making the celebration of the day.

She said research conducted by the Girls Education Unit revealed most of the Girls who got pregnant during the BECE did get any good marriage.

She said the survey also indicated that majority of these unfortunate girls who were impregnated could not continue their education to Secondary and University Levels.

She stated that it came out that most of the parents failed to provide their children basic items and money for school and had sent them into this calamity.

According to her, the Unit in collaboration with Camfed had organised a series of sensitisation programmes in the various communities in the District to educate both parents and girls about dangers of early marriage.

Ms Bruce stated that girls who faced child marriage often become academically disadvantaged because they have to stay home to take care of their children.

She said as a result the girl- child either delayed or cut short her education due to early pregnancy and motherhood.

M Bruce expressed regret that effects of child marriage were adverse, because it does not affect the girl-child and the families involved alone but the community and the nation as a whole.

She said girls involved child marriage tended to have no career or vocational skills and hence a lower income.

She said this placed the younger spouse in a precautions position of dependency on the older spouse and perpetuated a vicious cycle of poverty.

Ms Sandra Brew, Gomoa West CAMFED Association Co-ordinator urged the school girls to abstain from boyfriend relationship to enable them study hard to assist them benefit from the scholarship sponsorship package of the Association.

She cautioned them to stop watching Television TV and film show to the detriment of their education to assist them become responsible adults in future .