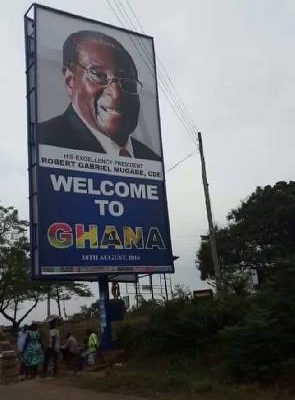 Ghana government has absolved itself of any blame over the cancellation of President Robert Mugabe’s visit to the country, noting it did not invite the Zimbabwean president.

The 92-year-old president was scheduled to arrive in Ghana at 4:00pm on Thursday, August 18, for a four-day state visit but the said visit was cancelled at the last minute.

No reasons were given. However, sources told 3News that Ghana’s President, John Mahama, who was expected to confer on Mr Mugabe, the Millennium Lifetime Achievement award for his role in Zimbabwe’s liberation struggle from British colonial rule, was going to be out of Accra. The Asantehene Otumfuo Osei Tutu II who was to play a key role in the visit of President Mugabe was also said to be out of town.

But Deputy Minister of Communications, Felix Kwakye Ofosu told Onua 95.1FM that Ghana had no hand in the invitation of President Mugabe.

He said though President Mahama was to have billed to have hold bilateral talks with Mr Mugabe, the visit was not a State visit, indicating that Mr Mugabe’s invitation was on the request of a private institution, the Millennium Excellence Foundation.

Several bill boards announcing President Mugabe’s visit have been mounted along various ceremonial streets of Accra and the cancellation of the said visit has raised eyebrows with some arguing that it has caused financial loss to the State. Others argued the visit was needless in the first place