Government to pay US$130m to cede T3 plant to AMERI 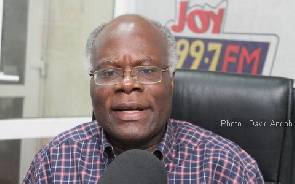 It has emerged that government is tied to commit a whopping sum of 130 million dollars to AMERI on the planned ceding of the T3 plant in the Aboadze thermal enclave.

The Minority Spokesperson on Energy, K.T Hammond is alleging that a classified document he’d intercepted covering the supposed transaction in the T3 project with AMERI quoted the excess amount as an additional fund for the beneficiary company towards the running of the key power plant in the energy sector.
“I’ve got so many pieces of communication and letters that the original contractors- Canadian Commercial Corporation have written to the Ministry. They’re asking for a remedial measure. Yes it broke down, and they’ve identified why the plant broke down, and they are quite happy to remedy the situation. They have written so many letters and Ministry of Power is not responding positively and all we hear is that they are arranging to give AMERI 130 million dollars. This is what I have – The Ministry of Power through VRA is arranging to spend 130 million dollars which has been proposed by AMERI to take over the plant, and it doesn’t make a lot of sense to me,” K.T Hammond told Accra-based Citi FM.

He claimed AMERI is not just taking over the plant as the amount in question is likely to be sunk into the proposed deal by government which explains for the reason why there is a stand off between the VRA workers and government.

The external parties, AMERI, Sunon-Asogli and the Ghana Power Generation Company (GPGC) were cited as the ones to benefit from the development.

The staff in a letter addressed to the Chief Executive of the VRA, this week said they’d “resolved to utilize all available lawful means to resist the perpetration of unwarranted dissipation of the Authority’s assets as well as “embark on a series of legitimate actions effective Thursday, 4th August 2016.”

Meanwhile Staff of the Volta River Authority (VRA) have insisted they are still protesting the Power Ministry’s plans to cede the Aboadze T3 plant to AMERI.

This comes after Deputy Power Minister, John Jinapor hinted that the disgruntled VRA staff have shelved their panned strike action ahead of another meeting on August 2015.