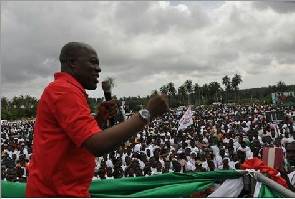 Vice president Paa Kwesi Amissah-Arthur says the government is committed to improving the Anglogold Ashanti Obuasi Mine. Speaking at a political rally at Obuasi, Mr Amissah-Arthur asserted that efforts are being made to rejuvenate mine to create jobs for the people.

“We will make the Obuasi mine attractive so that it can create jobs for the people,” Mr. Arthur stated.

He described the life of the mine as very crucial on the agenda of the government to provide practical measures to reactivate the mine’s operation, saying “the mine is at the heart of the president” He entreated the electorates to vote massively for President John Mahama and the party’s parliamentary aspirant to ensure the party retains power in this year’s December 7 general elections.

Mr Amissah-Arthur said President Mahama has demonstrated that he is a capable leader who delivers on every work that is given to him. NDC Parliamentary candidate for Obuasi West, John Alexander Ackon recounted the achievements of the government in Obuasi and its environs, describing the party’s performance as outstanding.

He announced the Obuasi-Kumasi road which the veep said has been awarded to a contractor, would soon be constructed.
 
Akufo-Addo no match for Mahama – Dr Sarpong

“Comparing John Mahama and Nana Addo is like comparing apples and oranges,” Dr. Sarpong told the gathering, and described Nana Addo as unfit to ascend the presidency.

Dr Sarpong who is also the NDC parliamentary candidate for the Nhyiaeso Constituency, was optimistic that the track record of the Mahama-led administration will reflect positively in the outcome of the December polls.

“We have done so much in the last four years and this will win Mahama the seat again…” he said, and urged the electorates in the Obuasi constituency to vote massively for the NDC.