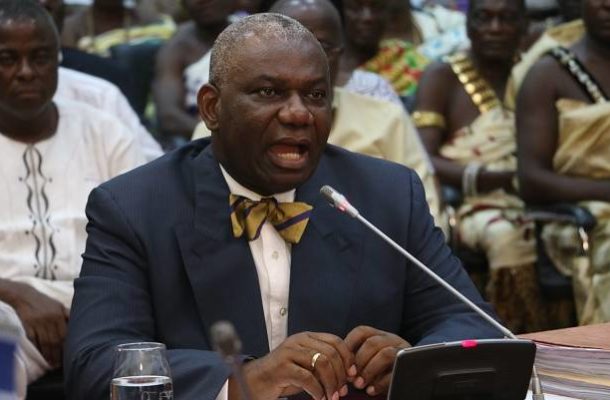 The government of Ghana has laid a bill in Parliament seeking to terminate the controversial 510 million dollar power deal with Ameri group.

According to documents sighted by Starrfmonline.com, government says it will make a savings of 405 million dollars to the state in the new deal.

The government has already handed the deal to a new company, Mytilineos International Trading company AG if Parliament approves the new bill.

The Energy Ministry laid the agreement on the floor Wednesday seeking a revision of the original 510 million dollars deal signed by the Mahama administration.

The government in the new agreement will pay Ameri $39 million while the new entity will also pay $52 million to Ameri on behalf of the government of Ghana.

Portions of the document stated that “reference is made to the public outcry in connection with the AMERI BOOT Agreement, coupled with the discussion of the issue in Parliament regarding the cost of the project.

“Much as the Ministry of Energy appreciates the importance of adequate power supply for the socio-economic development of the country, the Ministry is also very much concerned about the cost of the project in order not to overburden the citizenry with high cost of electricity.

“As a result, the Ministry initiated discussions with the parties, and renegotiated the lens of the BOOT Agreement in line with affordability and financial sustainability. These discussions were preceded by the formation of a Committee by the Minister for Energy to review the BOOT Agreement. The Ministry has therefore established a new contractual framework safeguarding the agreement of power and the continuous of the proper operation and maintenance of the plants by an experienced company, Mytilineos International Trading company AG for a term of 15 years from the novation and amendment agreement effective date, during which the provision of operation and maintenance services and all related services shall be undertaken by the company.”

“The GoG in view of the aforementioned purpose also wishes to adjust the contract price accordingly and establish a new financial equilibrium to reflect the extension of the term for the provision of the services and the performance of the obligations under the original BOOT agreement.”

The Mahama administration signed the $510 million contract with AMERI to build power plants, own and operate it for five years before transferring it to the Government of Ghana during the energy crisis in 2015.

This was done on a sole-source basis after a meeting between the former President of the Republic of Ghana and the Crown Prince of Dubai.

The NPP then in opposition described the agreement as a “stinking deal” which will be re-looked at when it assumes power.

A 17-member committee established by the Energy Minister Boakye Agyarko advised the government to re-negotiate the $510m power deal with UAE-based AMERI energy after a report revealed it was over-priced by $150million.

The latest move by the government also comes after the Attorney General Gloria Akuffo warned the Energy Ministry to dismiss plans of terminating the AMERI deal because it will end up in huge damages against the Government of Ghana.

In responding to two letters from the Energy Minister requesting for legal advice to suspend monthly payment to AMERI, the attorney general kicked against the move because “the deal is valid” and satisfies Ghana’s procurement processes.