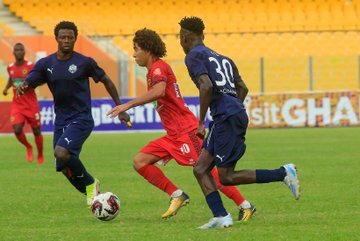 Kumasi Asante Kotoko wrapped up the Ghana Premier League 2021/2022 season with a draw in their match day 34 game against Accra Lions on Saturday.

It was a game that had very little impact on the league as Asante Kotoko had already won the league whiles Accra Lions also had stayed in the league for next seaon.

The most key talking point was whether Frank Mbella Etouga will equal or break Ishmael Addo's 22 goal record but he failed to do so.

Despite the little ramifications of the results on the league table both teams played with real determination but the first half ended goalless.

Seven minutes after the recess Abass Samari gave the home side a well deserved lead as the champions were stunned.

The champions pressed for the equalizer and they left it very late as Samuel Boateng connected home Frank Mbella's pass yo make it 1-1 for Kotoko.

All other matches for the final game will be played on Sunday 19th June at 3pm with relegation the talking point.