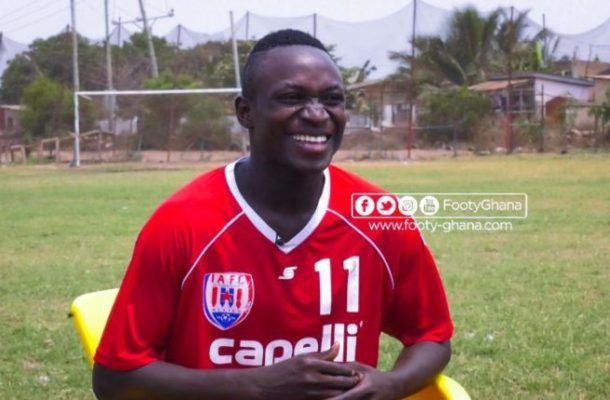 Inter Allies attacking sensation, Victorien Adebayor has disclosed that playing in the Ghana Premier League has added a new dimension to his play.

According to the Niger international, the standard of the Ghanaian game is much higher compared what is in his native land.

“The standard has been much higher compared to what we have back home in Niger,” Adebayor told TV3’s GPLXpress show.

“I was used to being fed with the ball from the back and just doing the finishing. But here [Inter Allies], I do more work with and without the ball.

"I run into spaces to get the ball and attack which I was not used to in Niger. And I’m enjoying it,” Adebayor added.

After nine matches in the ongoing campaign, Adebayor, who is in his second season, is joint-top scorer with Aduana Stars’ Yahaya Mohammed on 8 goals but has played a game less.

The striker said: “I was not in the kind of shape I find myself now like in my first season. I feel very much in form this term.

“My targets? I prefer to do the talking on the pitch. I’m a player and all I look out for is the chance to score. So I target the opportunities that will make me score more and not just the wishes.

Goal-king? That one, only Allah knows if I will beat off the competition and win the goal-king race or not. Mine is to do well to score as many as possible whenever I play.”

Victorien Adebayor will be hoping to continue his rich scoring form then Inter Allies come up against Berekum Chelsea in a 2019/20 Ghana Premier League match-day 10 clash at Golden City Park on Saturday, February 15.