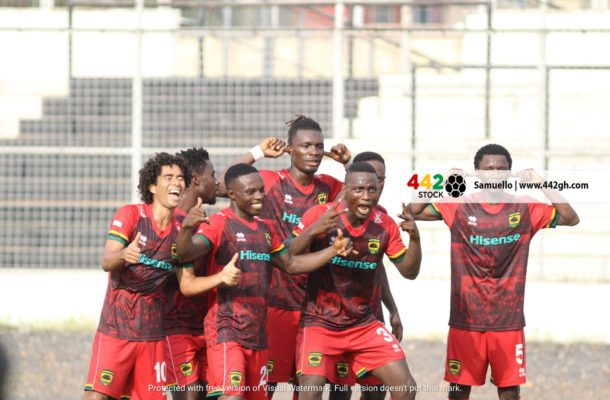 The match initially was scheduled to be played on 25th February,2021 but was rescheduled due to torrential rains at Kotoko's then home grounds the Accra Sports Stadium.

Kumasi Asante Kotoko shot into the lead with a ferocious free kick from center back Ismail Abdul Ganiyu from about 30 yards to open the scores for Kotoko in the 12th minute.

Silky Brazilian midfielder Fabio Gama added the second goal after being teed up by Andy Kumi before unleashing a fierce shot into the bottom corner of the net to double Kotoko's lead in the 42nd minute.

After scoring the goal the Brazilian dedicated the goal to his pregnant wife Aniele Ribiero who is carrying their second child.

Andy Kumi flicked home deftly with the back of his head from a perfect cross from full back Imoro Ibrahim in the 63rd minute to give Kotoko a three nil lead and his first goal for the club.

He came on briefly in their 1-1 drawn game against Techiman Eleven Wonders last Saturday.

Three minutes after coming on as a substitute for Kumasi Asante Kotoko in the Ghana Premier League for his debut, Michael Vinicius scored .

The Brazilian import was introduced into the game in the 79th minute as replacement for Francis Andy Kumi.

Three minutes later he was celebrating wildly after he scored a fortuitous goal on his debut to give Kotoko a 4-0 win.

Augustine Okrah hit the upright with a shot, and from the rebound, Godfred Asiamah's low shot is blocked but only as far as Michael Vinicius, who curled it home for a goal on his debut.