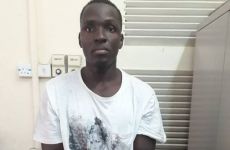 A 28-year-old man, who claims to be a trader, has been arrested by the police at East Legon in Accra for allegedly possessing firearms without authority.

The suspect Buzu Mohammed, a Togolese national, was arrested by a police patrol team at East Legon on Saturday at about 2:35am.

The suspect was among passengers who hired the services of a taxi driver from the Tetteh Quarshie Roundabout to East Legon.

The Accra Regional Police Commander, Deputy Commissioner of Police, (DCOP) George Alex Mensah, told the media that around 2:35am on Saturday, the police patrol team intercepted a taxi with registration number GT5177-14 and conducted a search in the vehicle.

The driver subsequently dropped the loaded pistol and took to his heels.

He was given a hot chase and arrested the police.

Buzu was conveyed to the regional command for questioning.

Upon interrogation, the suspect said he bought the pistol from someone at a cost of GH¢1,300 but had made part-payment of GH¢700.

The regional commander said the suspect had refused to lead the police to the said seller.

According to DCOP Mensah, Buzu on February 28, 2018 was arrested by the Sogakope Police for the same offence, but was freed by the court for want of evidence.

He is currently in custody assisting in police investigations.