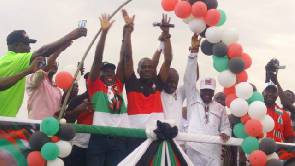 The Member of Parliament (MP) for Tamale South Constituency has pledged to garner 70,000 votes to back the second term bid of President John Mahama.

Haruna Iddrisu says even though there are challenges facing the economy, youth unemployment and problems with the education system, the President has put in place the requisite measures to address them hence he must be supported.

“We have a duty and responsibility to support President John Dramani Mahama to succeed. There are challenges but we must support him to have a sacred eight years,” he said.

The MP who is also the Employment Minister made these remarks when he addressed supporters of the governing National Democratic Congress (NDC) at his campaign launch at the Tamale Vitting Senior High School park.

The Tamale South legislator says “President Mahama should tick Tamale South and tick every polling station in the constituency.”

He told the people his works in the nation’s Parliament have been to re-echo their aspirations and wishes for the past 12 years. “I have been a strong advocate and work to reflect your challenges,” he said.

This, he believes is work in progress and appealed to the people to support his re-election bid so that he would continue fighting their cause.
Majority leader, Alban S. K. Bagbin, who was in attendance cautioned the residents of Tamale to be wary of the flagbearer of the New Patriotic Party (NPP), Nana Addo Dankwa Akufo-Addo.

He says there was no way anybody with the interest of the nation at heart would choose disunity over unity and peace over instability in the coming election. This is the difference between the NDC and the NPP.