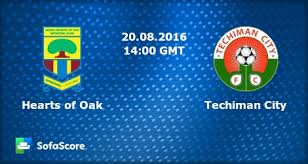 Hearts of Oak look set to bounce back from their 3-0 humiliation in the hands West African Football Academy which saw them drop to second place on the league ladder.

They tackle newcomers Techiman City FC at the Accra sports stadiumon Saturday with hopes of reclaiming top spot with a win.

Defensive duo Inusah Musa and Thomas Abbey return to the squad to face the Citizens on Saturdaymissing last Saturday's stunning defeat at Sogakope.

Centre back and captain Robin Gnagne looks very doubtful for the game.

The Ivorian import failed to train with the team on Wednesday with an injury but hopes to recover on time to make squad for Techiman City's visit.

Techiman City FC succumbed to a 1-0 loss to Ebusua Dwarfs at the Ohene Ameyaw Park last Sunday which ended their home invincibility this season.

They are geared up to make amends by shocking the Phobians with a victory on Saturday at the  capital.

Experienced striker Stephen Manu is racing against time to be fully fit to be available for selectionon Saturday.

He suffered a knock in their last league game last Sunday.

They have rest of the players fit and available for the big fixture.

Assistant coach Nana Adarkwah still leads the team since no substantive trainer has been appointed.

*Hearts of Oak have lost only one of their last nine matches in the premiership.
(W3 D5 L1)

*The Phobians have won just three of their last nine matches in the premier league.
(W3 D3 L3)

*Techiman City FC are without a win in their eleven away games in the premier league this season.
(W0 D2 L9)

*Hearts of Oak were held by Techiman City FC in a 0-0 stalemate when they met in the premiership for the first ever time.

*Techiman City FC are making a trip to play the capital club for the maiden time in the premier league.

*Hearts of Oak have managed to keep five clean sheets at home in the league this campaign after eleven matches.

*Techiman City FC have conceded in each of their eleven trips in the premiership this season.