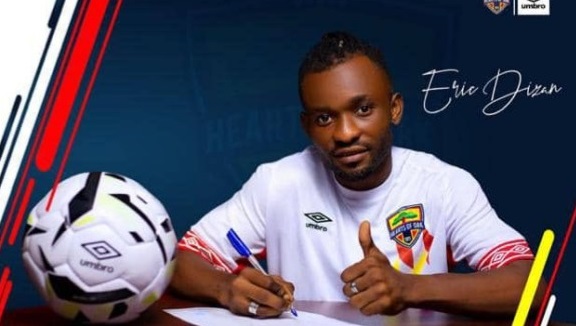 Managing Director of Ghana Premier League giants Hearts of Oak, Mr Frederick Moore, is banging his hopes on to the club’s new foreign imports to fill the void left by the attacking duo of Joseph Esso and Kofi Kordzi in the 2020/21 Premier League season.

According to him, the Phobians were building a team to ensure the exit of the two stars had no serious negative impact on their quest for honours this season.

There have been growing concern amongst Phobian supporters that the exit of the duo will have hinder the club’s quest of ending a ten-year trophy drought.

however, Mr. Moore remains adamant that new signings from Cote d’Ivoire, Niger and Nigeria will fill the void created and make the team very competitive again.

“We brought in international players, seasoned premiership players and I’m happy with the players we signed,” Mr Moore told the Graphic Sports in an interview on Sunday.

“Our new midfielder [Abdourahamane Mamane Lawali] was brought from Niger, we’ve brought in another player from Cote ‘d’Ivoire, Eric Dizan, who is also a local national player, and another striker who once played for the Nigerian under-17 and under-20 sides; these will make our team very strong and competitive,” he added.

Mr Moore further revealed that, the Rainbow club are ready to take up the challenge of winning the Premier League title which had eluded them for the last decade.

“Our target is the same going into every league, to do the best we can and at the end make sure we are where we want to be.

“I am sure everybody wants to win the league, I am not sure there is any club coming to the premiership who doesn’t want to win,” he said about their Premier League target.

He noted that the challenges of players exiting clubs at a point would not be limited to Hearts.

“Some players would run down their contract and we have to deal with it. Most clubs in the world goes through these challenges so we are not different.” he said.

The Phobians will not drop their guards in the upcoming season and will treat any of the 17 other Premier League clubs as a threat to their ambitions.

“Every single club is a threat to our ambition and we have to face every club that we meet during the season with the same determination as we’ll do with any other club,” he emphasised.