Hearts of Oak Player of the Month nominations for March 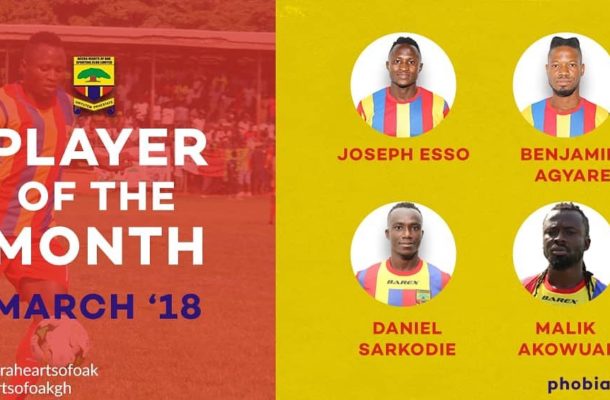 Joseph Esso, Benjamin Agyare, Daniel Sarkodie and Malik Akowuah are the four men in the frame for Hearts of Oak’s Player of the Month award for March.

The Phobians have amassed 4 points from their opening three games including a draw against newly promoted Eleven Wonders, a defeat to AshantiGold and a victory against Ebusua Dwarfs in their last encounter.

Joseph Esso scored two goals and won a penalty on his debut which Winful Cobbinah converted in Techiman. The former Dwarfs marksman was on target against his former side in our last game in March and he also scored on his home debut.

Benjamin Agyare has been a solid acquisition so far in the heart of our defense and he did not put a foot wrong in the month of March. The defender has an assist to his name, having setup Esso for his account opening goal for the Phobians.

Daniel Kordie was superb in our first game of the season and he followed that fine performance up by providing an assist for Patrick Razak in our game with Dwarfs.

Midfielder Malik Akowuah was named the Man-of-the-Match in our 0-2 victory over Dwarfs. Akowuah was a pale shadow of himself in our game against Ashgold but he's provided the platform on which our attacks have been built in two of the three games we played in March.

Fans can vote for their favorite player via an online poll on the club’s official Twitter and Facebook accounts.