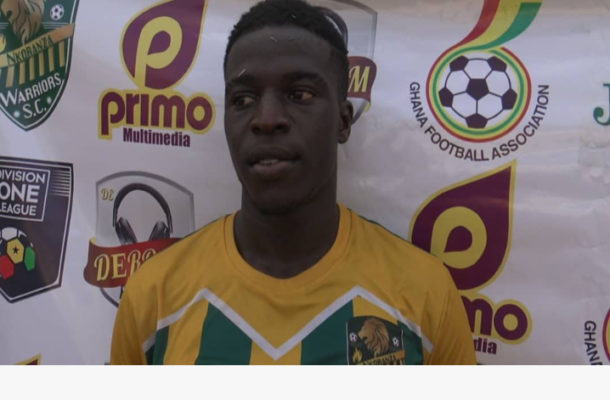 Accra Hearts Of Oak have  reached agreements to acquire the services of  player Isaac Mensah from Nkoranza Warriors FC.

The deadly striker who has got 8 goals to his name in the suspended Division One League and boost of 4 goals in a single game against Gbewaa Fc.

His Announcement is been Delayed because of spread of the Coronavirus and the partial lockdown of the Country.

Mensah will be unveiled by the Rainbow club in the coming days.

His announcement has been delayed following the outbreak of the Coronavirus in the country.

He becomes the third player to join Hearts of Oak in the ongoing transfer window after Abednego Tetteh and Niger international Abdourahamane Mamane Lawali.

He has scored eight goals for Nkoranza Warriors in the zone 1 of the ongoing National Division One League so far.

Mensah is the only player in Ghana to score four goals in a single match [against Gbewaa FC] in all Ghana FA Competitions this season.