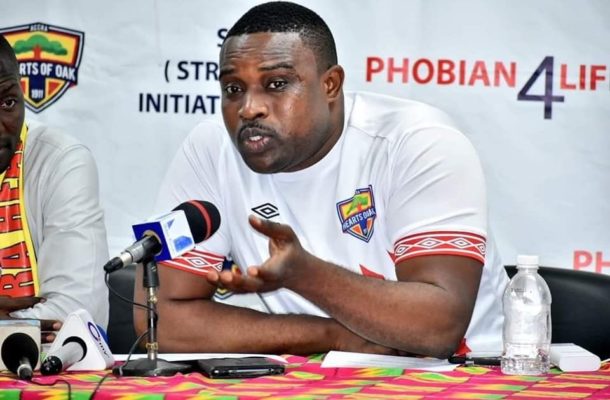 Chairman of Accra Hearts of Oak's National chapters committee, Mr. Elvis Herman Hesse has stated that he is impressed with coach Kim Grant's performances since taking over the club last year.

According to the Phobian board member, Grant has done very well since taking over although a year can't be used to judge the coach.

Speaking to AshFM on Friday, Herman said,"I can't use just a year to judge Kim Krant as a coach of Hearts of Oak but we all know he has done very well since he took over the team".

"Though there has not been any competitive league for the past one year so he was tested with the NC tournament and we all saw that his performance wasn't bad", he added.

The Hearts supporters chief also called on his fellow supporters to rally behind Grant.

"He has done what he can do best and I know with our support,Kim Grant will deliver very well for Hearts of Oak", Herman stated.

"Our performance wasn't good but he has risen the standard to another level though not 100% since he took over.

"He has been able to improve the performance of some of the players and he has a good relationship with his players.

"We are proud to have Kim Grant as our coach looking at his level as a player and as a coach and we will do all we can to protect him to do the job well.

"People never believed in Kim Grant when he was given the opportunity to coach Hearts of Oak but we have all seen his performance now", he concluded.

Kim Grant took over Accra Hearts of Oak last year  and has earned the praise of many Phobian supporters.