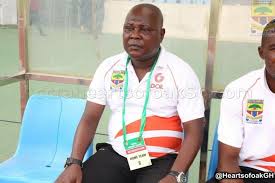 National Chapters organizer for Accra Hearts of Oak, Paa Kofi Sunsum claims every member of the the club’s fan base is calling for the head of Coach Henry Wellington following the team’s poor form in the Zylofon Cash Premier League.

The Premier League giants have not won a game in their last seven games, and were left heart broken after Awudu Tahiru scored a last minute goal in their 1-1 draw against Medeama on Sunday.

The last time Hearts tasted victory was on match day 8 when they defeated arch-rivals Kumasi Asante Kotoko and according to the supporters chief, the technical team is solely to be blamed.

“Every Hearts supporter is calling for the head of  Henry Wellington, He doesn’t deserve to Coach a team like Accra Hearts of Oak” Paa kofi said in an interview on an Accra-based radio station.

At the end of the first round of the Premier League, the Phobians finished at the 12th position with 17 points.