Hearts of Oak to report Lawali Mamani to the GFA 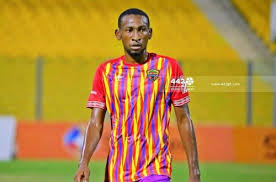 Abdourahamane Mamane Lawali has been sidelined by injury for months

Accra Hearts of Oak is weighing options to report their Nigerian import Abdourahamane Mamane Lawali to the GFA following the players refusal to accept a medical treatment in South Africa.

The Phobian have successfully completed plans for the injured Lawali and Daniel Kodie but the Nigerean is reported to have rejected the move for unknown reasons.

scheduled for surgery in South Africa.

The club has requested for the players to make themselves available for the trip by Monday, May 10th, 2021 to make room for pre surgery discussions before the surgery will take place on May 13, 2021.

All medical expenses shall be borne by Accra Hearts of Oak.

However, Lawali and his agent who had earlier refused to renegotiate for his contract extension has now refused to go for the treatment in South Africa.

According to the Phobians three has not been any breach of contract on their part.

“The Player shall immediately report any incapacitation or illness to the Club and the Club shall keep a record of any incapacity or illness," according the clause in the contract, as reported by the club.

"The Player shall submit promptly to such medical and dental examinations as the Club may require and shall undergo, at no expense to himself, such treatment as may be prescribed by the medical or dental advisers of the Club in order to restore the Player to fitness.

"The Club shall arrange promptly such prescribed treatment and shall ensure that such treatment is undertaken and completed without expense to the Player."

Accra Hearts of Oak has therefore decided to report Lawali’s conduct to the GFA for advice if he insists on not going for the treatment in South Africa.

The player has been out of football action for the Phobians since the first round of the league when he featured in the game against Bechem United.